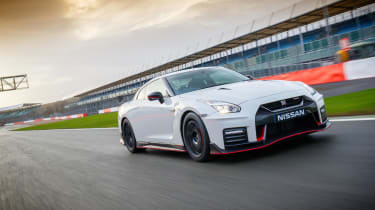 As Nissan’s mighty four-wheel drive performance coupe closes in on its tenth year of production, the 2017 GT-R Nismo becomes the most expensive version ever. At £150,000 the new Nismo costs more – in terms of list price at least – than the Porsche 911 GT3 RS, the Audi R8 V10+ and even the McLaren 540C.

It’s actually a little misleading to describe this as a new GT-R Nismo, though. The only significant changes between it and the previous version, launched three years ago, are the same differences that you’ll find on the 2017 base model GT-R compared to the 2016 version. That means revised front end styling and the much improved dashboard and centre console.

As far as the really important stuff under the skin goes, the latest GT-R Nismo is scarcely any different to the earlier one. At £150,000, then, is it simply too expensive?

The 3.8-litre twin-turbo V6 engine has been left untouched compared to the previous Nismo, which means it produces 592bhp and 481lb ft of torque. That’s a modest 30bhp and 11lb ft more than the standard GT-R. Similarly, the four-wheel drive system and rear mounted six-speed twin clutch gearbox are carried over.

Naturally, with four-wheel drive and so much power the GT-R Nismo is sensationally quick. Nissan claims a 196mph top speed and a 0-62mph time around the 2.5-second mark – it doesn’t quote an exact time.

Nissan’s engineers don’t make a big deal of the technical upgrades made to this Nismo over the previous one, either, but push them on the matter and they’ll tell you about the improved airflow around the rear of the car and detailed tuning of the dampers. The best way to tell the two apart visually is to check out the front splitter – the new car’s has a wave shape rather than being mostly flat. That aside, everything else is as it was.

The upgrades over the base model GT-R are very comprehensive, however. The suspension is around twice as stiff, the aggressive aero kit gives much more downforce, the turbos are GT3-spec items from IHI and the lightweight Recaro seats have very naughty looking carbon fibre shells. The front arches are a little wider, too, and the rear anti-roll bar is hollow to reduce weight.

On a very slippery Silverstone circuit the GT-R Nismo feels very much like the previous version, which is no surprise and nor is it a bad thing. It’s staggeringly fast in a straight line. Actually, trying to describe the way with the Nismo accelerates with words is as hopeless as drawing the heavens with crayons, but let’s have a try. It’s like crashing into an oak tree in high-speed rewind. It’s savage and addictive. It’s laugh-out-loud brutal.

The engine is wonderful, too. Once it’s spinning above 2500rpm it has much of the response of a normally aspirated motor and a ferocious top end. Gearshifts on the way up are fast and clean, but the latest twin-clutch ‘boxes do now offer more immediate downshifts.

We’ll have to wait a little longer to drive the Nismo away from the race track, but there’s nothing to suggest it’ll be any different to the ultra-stiff model it replaces, which was close to being unusable on bumpy roads and intensely exciting on smoother ones.

Despite Silverstone’s slick, greasy surface it’s clear the Nismo is flat-bodied in corners and supremely agile, responding to steering inputs and flicking from one corner to another like a car half its weight. It also steers beautifully, the hydraulically-assisted rack flooding your finger tips with streams of data.

With the standard GT-R now designed to be more comfortable and accommodating in every day use the two models feel more like distant cousins than brothers, but there are one or two lingering family traits. There’s lots of oversteer, for instance, both when off the throttle on the way into a corner and when under power. It makes the Nismo – and the base car for that matter – hugely entertaining and agile on circuit.

With the car’s various parameters flicked into R mode it feels even more aggressive, although the firmer suspension settings don’t particularly help in such low grip conditions. The stability control system is subtle enough to not simply take the throttle away from you when the wheels start to slip, or at least it is until the oversteer angle gets too big for the computers to tolerate, at which point the car gathers itself in quite a hurried and clumsy manner.

The Nismo needs a dry track to show its best and with the aggressive Dunlop tyres warmed up it would be very fast against the stopwatch. Being diligent sorts we’ll get one back soon. You know, just to be sure.

£150,000 does seem like a lot of money for a GT-R – in fact it’s almost twice the price of the base model – but being built in such low numbers the Nismo will always be a very exclusive car. In fact, with just 400 being built per year Nissan can hardly satisfy demand.

Just 24 examples of the previous Nismo came to the UK during its two years on sale, and although sales of this latest version have outstripped that already no more than 30 or 40 will come to the UK each year. The GT-R Nismo will remain a rare sight.

As far as direct rivals go, the Nismo has the likes of the £121,780 BMW M4 GTS and £131,296 911 GT3 RS to think about. The Porsche is an exquisite machine and certainly the most broadly capable of all three, while the flawed but characterful BMW is every bit as exciting as the rampant, unapologetic Nissan.