The Nissan March Nismo hints at a potential Micra hot hatch, though the UK won't see it 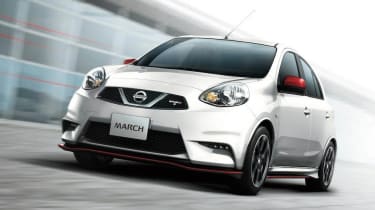 The Nissan March – the Japanese iteration of the Micra supermini – has received the Nismo tuning treatment. It’s the latest in Nismo’s product onslaught, as Nissan’s official tuning arm becomes a bona fide performance brand. This version, however, won’t sit alongside the 370Z Nismo and Juke Nismo in UK showrooms.

As small hot hatches go, this one is pretty uncompetitive, the base March Nismo especially. Its 1.2-litre petrol engine produces just 79bhp, and is mated to a CVT automatic transmission, an uninspiring proposition for anyone seeking hot hatch thrills.

Browse used performance Nissans on evo Cars for SaleThe outside gains a makeover, with a subtle body kit and Nismo’s trademark red detailing to contrast with black, silver or white paint. The interior boasts an Alcantara shrouded steering wheel and bucket seats.

It adds some much needed excitement to the Micra, but the Nismo S looks unlikely to make it to the UK, lagging behind entry-level hot hatches such as the Suzuki Swift Sport and Renaultsport Twingo 133 by around 20bhp.

'The March Nismo announced is a Japanese market model and will not be sold in Europe, where the new Micra has just been launched’, a Nissan spokesperson told us. ‘A range of Nismo models specifically designed and engineered for Europe will be introduced over the coming months, with several models currently being investigated for market feasibility.' A new Nissan GT-R Nismo – rumoured to have a monster 700bhp output – is among these.