The new Nissan Micra has gained a supercharger - but does it bring any excitement to the rest of the driving experience? 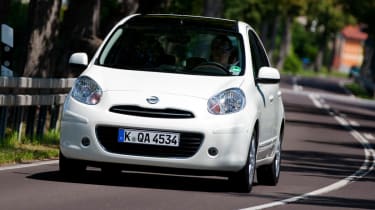 A Micra in evo, which is unlikely in itself. The new-generation Micra is made in India and designed down to a price on the new Nissan-Renault platform which will eventually underpin the next Clio, among others. Specifically this is the new Nissan Micra DIG-S, the letters standing for Direct Injection Gasoline Supercharged. A blown Micra with spoilers… don't get too excited just yet, but please continue reading.

This engine is force-fed by a pint-size version of the Eaton supercharger used in a Jaguar XKR, so it generates 97bhp from its 1.2 litres and three cylinders. Only 97bhp? Well, the point is that the engine also scores just 95g/km on the all-important official CO2 test, a tax-slashing 20g improvement on the non-supercharged version's score despite the latter's lower, 79bhp output.

Puffer apart, the DIG-S's engine gains direct injection (obviously), low friction 'diamond-like carbon' coating for its tappets and piston rings (like a Ferrari 458), an on-demand oil pump, nano-surfaced camshaft lobes and general high attention to friction reduction. And it runs, when under light load with the supercharger declutched from its drive and a direct channel from intake to throttle body opened, by the Miller cycle - this makes the engine more economical when driving gently, as in the official tests.

As for why an expensive supercharger is used instead of a cheaper turbo, Nissan's engineers cite the free-flowing exhaust unobstructed by a turbo rotor's constant presence, and the lack of response lag. Anyway, 97bhp is still pretty healthy for a little car. Isn't it?

Don't expect a wall of supercharged torque from low revs, because it doesn't happen. Driven gently, the DIG-S feels much like the regular three-pot Micra. The difference comes when you use more revs and more accelerator. Between 3000 and 4000rpm the deep, smooth engine note hardens as the supercharger seamlessly joins in. Now the Micra gets interested, hardly becoming a junior hot hatchback (0-62mph takes an unimpressive 11.3sec) but feeling as though powered by a larger, crisper engine.

This is one of the smoothest 'triples' ever, and you sense that with a more power-flavoured re-map it could be a great little unit. Tall gearing and good aerodynamics help the Micra get to a claimed 112mph maximum.

What makes the Micra unexpectedly entertaining is that this game little engine is matched to unusually throttle-adjustable handling, credible-feel electric power steering and a ride that's supple without ever being soggy. It's a very chuckable-aboutable car, in an old-school and rather French way. Neat five-speed gearchange, too.

Compared with the small diesels against which it was conceived to compete, more enthusiastic and virtually as economical. Compared with a Fiat 500 TwinAir (same official CO2, similar notion of downsizing and forced induction) it's less punchy despite the Fiat's tiny 875cc capacity and lower 84bhp output.

The exterior styling looks a bit nondescript, with no obvious Nissan identity and little of the designer-cuteness that defined the previous two Micras whether you liked them or not (probably not, I'm guessing). And the interior is grim, a rocky outcrop of hard, shiny plastics and cheap switchgear next to which the top version's ruched-leather trim and posh-car toys (cruise control, heated seats) look ridiculous. The cabin design flair of the previous Micras has died here. Prices for the DIG-S will stretch from £11,000 to £15,000, the highest tag including a CVT transmission, but this car is best enjoyed in entry spec.