The new Micra is dressed to impress, but an unfinished feel to the drivetrain kills its chances at class honours 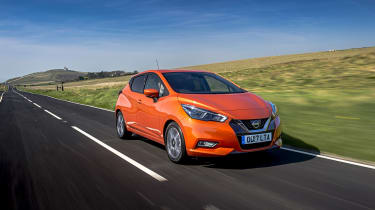 Nissan Micras haven’t been a regular feature in evo-land. While perfectly suited for inner-city commuters, driving schools and school-run parents, they’ve rarely been able to entertain us like some of their rivals - only the short-lived 160SR really got close.

The new Micra appears to have taken the brand into more interesting territory however, with sharp styling and, if Nismo’s planned expansion takes hold, a sportier version to challenge GTIs, STs and RSs. Will Nissan’s Fiesta rival be the first to really entertain us?

As tested the Micra packs an 898cc turbocharged three-cylinder, such as you’ll also find in the Renault Clio, with which the Micra shares its underpinnings, and the smaller Twingo and its Smart cousins.

The reality of reaching such figures involves exercising a drivetrain that never feels particularly happy doing its job. Long gearing hampers any sense of urgency that the three-cylinder unit might be willing to display, and while you can palm through the ratios relatively quickly the engine’s reluctance to shed revs removes much sense of satisfaction from a slick change. 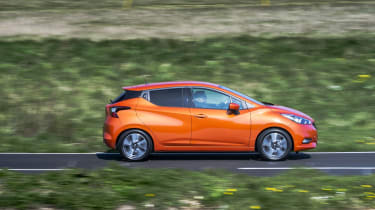 Worse still is the engine’s behaviour when spinning through the rev range. There’s little on offer at all below 2000rpm, while a surge at the car’s torque peak is followed by a dip again before 3000rpm. It’s intensely irritating when driving relatively slowly - something that cars such as this are surely designed for - and makes for jerky progress however careful you are, while the process of gaining speed becomes thoroughly unenjoyable at any other time.

Most curious of all is that little of this applies to the Clio with an otherwise identical drivetrain - so something must have gone quite wrong when Nissan’s engineers were installing it in the Micra. Even the usual three-cylinder thrum can't raise a smile here.

There’s little doubt the Micra has moved the game on from its poorly-conceived predecessor. The new car features a drag coefficient of 0.29 (Nissan claims that’s a best-in-class, though hybrid versions of the Toyota Yaris sneak in at 0.28) and the company says that while the car sits on a development of its V platform used by the old car, significant stiffening work has been undertaken to the benefit of refinement and improved handling precision.

The Micra also features a technology filtered down from the Qashqai called Intelligent Ride Control - which modulates the brakes to reduce the pitching motion you feel when going over speed bumps. 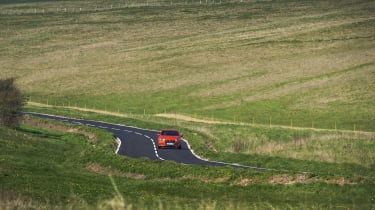 Disassociate the engine from the process of driving the new Micra and it’s actually fairly pleasant. There’s good grip, and the steering is both direct and well-weighted, meaning you quickly feel confident throwing the car through corners in the knowledge it’ll stick. In addition, the chassis feels well-balanced, with some throttle adjustability to help the car pivot.

There’s some body roll, a feeling exacerbated by the flat-faced seat bases that do little to hold you in place while you’re cornering, but it’s a natural, agile-feeling chassis that doesn’t deter you from driving quickly, even if you’ll quickly encounter the stability control if you push the tyres beyond their comfort zone.

But for brakes that grab a little too much at the top of their travel, it’s even possible to heel-and-toe as you change down the gearbox - though the unresponsive engine means you need a big prod on the throttle to match your revs.

And in the end it comes back to that engine and its completely disinterested nature. Granted, the Micra is not a performance car, and ultimately a new Ford Fiesta will entertain you in greater measure whichever metric you choose. But the Micra’s drivetrain is unpleasant to use even if you’re not judging by driving enthusiast standards - and there’s no excuse for that. 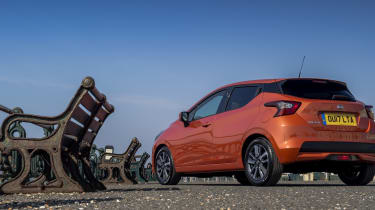 If you’ve not been put off so far, the Micra does have some other merits. Styling is a subjective topic but the Micra is at least interesting, and the cabin feels put together well. Everything has a chunky feel, the steering wheel is good to hold, the instruments are clear and the driving position comfortable over longer trips, even if it’s not particularly sporty.

Micras start from a minimum of £11,995 (for a non-turbocharged 1-litre triple in Visia trim) and rise to £18,765 for a diesel-powered Tekna model. A petrol Tekna such as our test car comes in at £17,435, though you can boost that number with various options packs (contrasting exterior trim and matching details on the five-spoke 17-inch alloys cost £550, while matching coloured interior trim detailing adds £350).

The entry price is lower than many rivals, though broadly the Micra’s pricing is par for the class. A similarly-specified Renault Clio Dynamique S Nav TCe 90 (and breathe) is £16,555, which undercuts the Micra, while a new Ford Fiesta ST-Line X with 99bhp 1-litre EcoBoost engine is £18,145 in Micra-matching five-door trim.