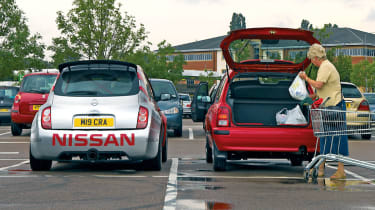 I never thought I’d see the day when a Nissan Micra was the most expensive member of our Fast Fleet, never mind the loudest, the most demanding and the scariest. But that day has arrived. Welcome to the weird world of the Micra 350SR.

Built to toughen-up the image of Nissan’s cutesy supermini (and, we suspect, because there are some genuine car nuts making the big decisions at Nissan UK), the 350SR is very much our sort of car. Where the rear seats usually reside there’s a Nismo-fettled 3.5-litre V6 producing 310bhp and driving the rear wheels, while under the bonnet there’s an aluminium fuel cell, the brake bias adjuster for the massive Brembo set-up and remote reservoirs for the fully adjustable Powerflex suspension. This is a serious piece of kit.

But then you’d expect nothing less of a car engineered and constructed by RML, the company currently contesting WTCC for Chevrolet and whose MG Lola EX264 won the LMP2 class at Le Mans in 2006. The quality and attention to detail is stunning: the rollcage is a work of art, the V6 installation incredibly neat, and the deep front splitter and subtly pumped-up wheelarches make the Micra look so, well, hard. Quite an achievement.

The project began in 2003 (two years after Barker started work on his Capri…) and originally saw the Micra fitted with the same 2-litre four-cylinder once found in the RML-built BTCC Primeras, hooked-up to a sequential six-speed dog ’box. The Micra R, as it was then known, was fabulous, but also utterly useless on the road. You’d get high on the fumes in the cabin, and the race-bred engine needed about 5500rpm on the dial before it really got going. So Nissan UK commissioned RML to re-engineer the car, this time with the tractable 350Z V6 and a nice conventional H-pattern six-speeder.

The newly christened 350SR did the rounds at the launch of the 108bhp Micra Sport SR at Cadwell Park, scaring journalists and eventually ending up parked snugly against a tree. It was fixed but, soon after, Nissan found it had run out of things to do with the mid-engined Micra. So they called us, and now we’re thinking of things to do with it. So far we’ve driven it to and from work, been to Tesco in it and generally tried to run the Micra as an everyday car.

Several of us are now partially deaf and anyone in the office who’s tried the 350SR has a kind of wired, haunted look on their face. It can be a bit tricky, you see. Think old-school 911, only with a higher centre of gravity and an angrier power delivery. Bloody hell it’s great fun, though.

And yes, I did say it’s the most expensive car on our fleet. Legend has it that the 350SR cost north of £250,000… Concentrates the mind, that number, especially during the wettest summer in living memory.