It’s very loud, has ‘interesting’ handling and drinks fuel at a shocking rate. Welcome to the crazy world of the Nissan Micra 350SR 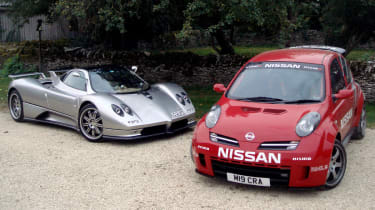 Door locks? Nope, they’re for wimps. This isn’t a car for leaving around the streets at night, after all, although quite how far any thief would get is debatable – either the hideously heavy clutch would force him to give up, or he’d run out of fuel, the range is so bad.

Once you’ve managed to clamber past the roll-cage and settle into the race seat (set so low that I can barely see over the dash), the next trick is getting the beasty started. No fancy keyless-go here, just a battery isolator switch, a key and a starter button. You’d be forgiven if you thought the engine had actually started as soon as you twist the key, such is the massive din the engine-bay extractor fans make. They’re so loud they make the Micra sound like some sort of a demented Prius. But prod the bright red starter button sitting in the centre of the dash and there’s no mistaking the moment the Nismo-tuned 3.5-litre V6 sparks into life. Good grief! How on earth is this thing legal? It buzzes, it snorts, in fact it does everything politicians want a car not to do these days. Excellent.

First stop tonight is to call in at Silverstone to see our Britcar 24-hour team in the 350Z as they go through the rigours of night practice. I haven’t got any passes to get in though, so a bit of blagging could be in order.

‘I fell off at Stowe and I’m trying to get back to the pits,’ I quip to the security guard at the main entrance.

‘Do you know the way back?' he replies.

‘Yep, I’ll be fine. And I’ll be more careful next time around…’

The car pops and farts its way through the infield, and at each checkpoint I just get waved on until finally I arrive at the fuel station in the pits. That was easy, but then I suppose this car does look like some sort of track refugee.

I was warned about the heavy clutch before I left the office, but it’s even worse than I imagined. As the gearing is really short too, when it’s time to leave Silverstone I make a point of occasionally short-shifting from 2nd to 4th to give my left leg a bit of a rest.

That Nismo engine sitting just behind the driver is a mighty addictive device, though, delivering proper old-school performance, but boy does it like a drink. It’s 65 miles to my house from the office. When I started out there were 46 litres in the tank, but now I’m home there’s just 24. To save you the maths that’s 13.4mpg! A Micra that’s more thirsty than a Zonda… But then this is no ordinary Micra.