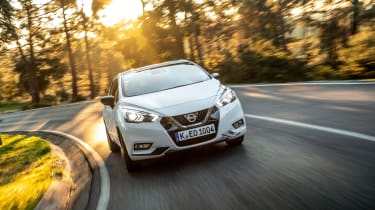 Nissan’s sporty hatch back catalogue is quite thin on the ground, with only the Juke Nismo and 370Z sharing the limelight with the GT-R. Now it has introduced a spicier version of the Micra - in their own words a ‘warm’ hatch - dubbed N-Sport, and designed to compete with cooking versions of rival superminis such as the Ford Fiesta ST-Line and Seat Ibiza FR.

Begining with the current generation car introduced in 2017 the N-Sport gains a new 1.0-litre three-cylinder turbocharged petrol engine providing 115bhp and 148lb ft of torque on overboost. A six-speed manual gearbox is standard as is a unique suspension tuning, so the ingredients are there for an enhanced experience over the standard car. But how does it fare against the competition?

The higher output version of two new three-cylinder petrol engines is standard in the Micra N-Sport and although the output figures are modest, the specification offers promise. Variable valve timing on the exhaust and inlet side, an electronically-actuated turbocharger and a forged steel crank reads like the specification of something more exotic, and gives the Micra N-Sport a broader, flatter torque curve than the 98bhp model. 133lb ft of torque is available from 1,750rpm through to 4,000rpm with an overboost of 148lb ft available, but the power delivery is satisfying and linear. There is an engaging three-cylinder thrum at higher revs but this is a smooth and refined powerplant given its capacity and cylinder count.

Driven back-to-back with that car there is a noticeable improvement in the way the N-Sport gathers speed from low revs even in a relatively high gear, yet it will happy spin past 6,000rpm even if the sweet spot is in the mid-range. The 0-62mph acceleration time of 9.9 seconds sums up the ethos of the N-Sport neatly; brisk, useful performance but unlikely to frighten your grandmother - the same engine is available in other trims, although the N-Sport is one second quicker to 62mph than the 98bhp model. 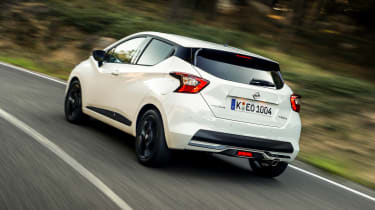 Small but detailed changes to the suspension set up are designed to give the handling a boost over the standard car and are on the whole successful. The ride is lowered by 10mm, damper rates have been increased and the electronic power steering has been retuned to suit.

Compared to the standard car the Micra N-Sport is marginally firmer over bumps but remains composed, while body roll remains well contained. Despite wearing the same wheels and tyres as high-spec standard Micras the amount of grip is good, even on sodden Portuguese roads, and the nose lets go progressively. The steering offers a little more weight than the standard set-up and turns in with good progession, although feedback through the wheel is adequate rather than hugely informative.

The wealth of standard safety systems mean pushing the outer limits will see winking lights admonishing you, but for what is still a humble if not inexpensive supermini the N-Sport offers a welcome extra dash of amusement.

The N-Sport’s pitching as warm rather than hot means it does not sacrifice economy for the sake of performance. Thanks to its light weight and efficiency the 115bhp engine is frugal despite the performance boost, and the wide torque band means it doesn’t have to be revved to extract decent progress. A WLTP combined figure of 47.9mpg and emissions rating of 133g/km are competitive with key rivals. 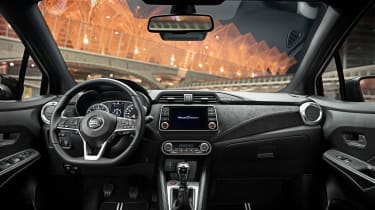 The Micra’s standard cabin is attractive and well-made but the N-Sport adds some worthwhile upgrades. A slash of Alcantara covers the dashboard and covers the seats, while there are flashes of white around the air vents and along the floor mats, although a little more of the contrast would have been welcome. The standard equipment receives a boost too, with a rear-view camera and parking sensors plus keyless start added to the already-comprehensive kit list.

Space up front is good for full-sized adults and although the rear can swallow two more at a push, the back bench is best reserved for children.

The Micra’s unusual high-tail design gets a visual fillip in N-Sport guise with a faux-carbon finish on the alloy wheels and door mirrors plus a gloss black finish to elements of the bumpers and side mouldings. It’s a shape that is more colour-sensitive than most and the additional elements do help, although it is unlikely to be bought solely on the strength of its looks.