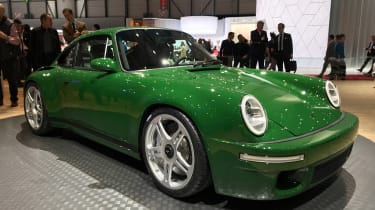 Ruf has revealed the latest of its retro-styled, but all-new models at the Geneva motor show. Following the CTR Yellow bird that was shown last year, aside from the colour change, Ruf’s newest model has lost the turbos and its iconic nomenclature and transformed into the naturally aspirated Ruf SCR 2018.

Although Ruf is best known for its heavily turbocharged 911-shaped cars, it has long been making naturally aspirated-powered cars too, most bearing the name SCR. The new SCR continues that convention and behind the rear axle sits a naturally-aspirated 4-litre flat-six engine that produces 503bhp at 8270rpm and 347lb ft of torque at 5760rpm. Although Ruf hasn’t quoted an acceleration figure for its new car, it has revealed it has a top speed of 199mph.

If the prospect of a high-revving atmospheric flat-six and a top speed just shy of 200mph didn’t seem thrilling enough, power is sent to the rear wheels only via a six-speed manual gearbox. 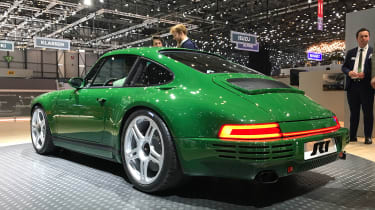 Like the CTR 2017 that Ruf showed at last year’s Swiss motor show, the new SCR is based around a full carbonfibre monocoque chassis. It is not, as its old-school 911 shape might suggest, based on a 90s Porsche chassis just with composite bodywork on top. Its predecessor, the SCR 4.2, was an engineering feat; Ruf took a 993 shell elongated the wheelbase, but kept the overall length of the car the same, then added radiators up front to cool the water-cooled 4.2-litre Mezger flat-six in the back.

The new SCR’s underpinnings are even more impressive, though. There’s not a hint of old 911 in its make-up, it has been designed, engineered, developed and built all by Ruf. Like last year’s CTR, the SCR has a central carbonfibre tub reinforced with an integrated roll cage that supports the roof. Bonded to the main composite structure are the front and rear subframes that support double-wishbone suspension with pushrod actuated dampers. The rear also holds the engine and gearbox.

The outer body is then fully constructed from carbonfibre, the brakes are carbon ceramic and there are also fixed-back hound’s-tooth Recaro seats, all helping keep the weight of the entire car down to an impressive 1250kg.

> Take a look behind the scenes of Ruf’s factory

Unlike its close relative, the CTR 2017, the SCR does not have a big whale-tale fixed-rear wing. Instead there’s a retractable rear wing, like on modern 911 Carreras and the 911 GT3 Touring. 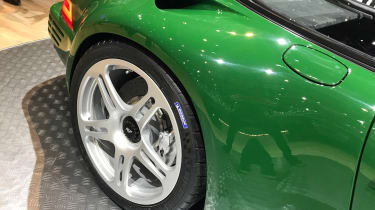 The rear wing isn’t the only departure from Ruf’s typical look. Instead of the blocky, functional five-spoke alloys that are seen on most of the company’s cars, the SCR 2018’s wheels have five twin-spokes. They still look just as purposeful however, with their centre-lock attachment as well as being wrapped in Michelin Pilot Cup 2 tyres.

As Ruf has proved over the pas 37 years as an independent manufacturer, it’s capable of creating truly impressive and exciting vehicles. The SCR 2018, with its blend of high-tech carbonfibre construction and involving manual gearbox and atmospherically fed engine, promises to be one of the most thrilling and engaging car’s Ruf has ever created.