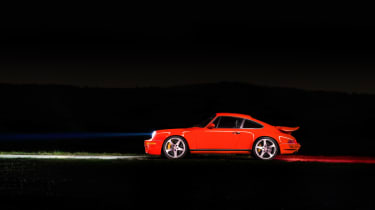 To the uninitiated this might look like a humble Porsche 964. However, its big five-spoke alloys, cavernous cooling vents in its front bumper, tiny wing mirrors, and slotted rear bumper do give the game away that this is no ordinary 1990s Porsche. In fact it’s not even a Porsche at all: You're looking at Ruf’s naturally-aspirated 518bhp SCR 4.2.

The visual differences between the SCR and a 964 are positively subtle compared to what’s going on beneath the surface. Firstly, it's based on a 993 body-in-white and utilises the later car's multilink suspension. To improve dynamics and stability even further, Ruf has lengthened the wheelbase by 70mm by pushing the front axle forward by 50mm and the rear back by 20mm without extending the overall length. This stretched wheelbase is so artfully disguised that, if no one told you, you'd have little idea that anything was different.

The structure isn’t finished there though; Ruf also welds in an integrated roll cage to add some stiffness. The architecture is then covered with 964-alike carbonfibre bodywork that further increases the body’s strength while also helping keep the SCR’s kerb weight down to 1200kg.

The substantial reengineering that goes into SCR should help explain why Ruf is considered a car manufacturer by German authorities, rather than a tuning house. 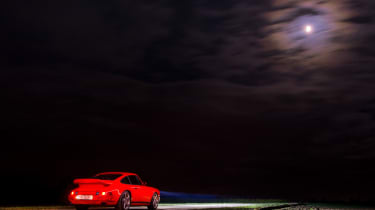 The Ruf's full name, SCR 4.2, gives a hint as to just what’s hiding under that whale-tail wing: a 4.2-litre flat-six. But rather than a bored-and-stroked air-cooled 993 engine, the SCR is packing an enlarged version of the enchanting Metzger engine that powered the pre-991 GT3 models. The increase in capacity means that the SCR’s motor makes 518bhp and 370lb ft of torque. That’s 25bhp and 31lb ft more than the 4-litre version of the engine found in the ultimate 997 GT3 RS 4.0.

And yes, that engine is watercooled. As if you needed to be even more impressed by the SCR’s longer wheelbase, then Ruf goes and adds a radiator into that shorter front overhang.

Drive is sent through a six-speed manual gearbox and mechanical limited slip differential to the rear wheels. The LSD teamed with the SCR’s rear engine traction and minimal weight means it can accelerate from 0-62mph in 4.1sec. Even more impressive is its top speed of 200mph.

If you’ve read this far then you might not want know what it’s like to drive. So incredible is the ethos behind the SCR and so special is its specification that you’d think it can’t possibly live up to your expectations. But fear not, as the way the SCR drives is, without a shadow of a doubt, its strongest attribute.

Much like the outside the interior is old-style 911 through and through, from the five-dial fascia, the upright windscreen, low-mounted gear lever and slightly offset pedals. But, rather than the materials just looking and feeling brand new, there’s an aura of modernity that instills the entire car. It’s not exactly obvious which element is creating this feeling, though. Maybe it’s the Alcantara-wrapped steering wheel, the carbonfibre door cards, or even, despite their retro Pascha-covered cushions, the fixed-back Recaro seats.

A reminder of the SCR’s lighweight body lurks above your head, as the raw carbonfibre of the underside of the roof skin is left exposed. It's not the polished smooth finish that you find on the door cards though, instead having a rough and textured feel. It doesn’t need to be pretty, but it’s still uniformed and presentable, a perfect example of the sheer level of detail that Ruf puts into its cars.

The clutch is short and sharp, so pulling away smoothly or without stalling takes a little bit of practice. Once moving there are no other quirks to get used to, as the SCR feels so modern, so solid and competent. The ride is firm but not crashy or harsh and the structure is incredibly rigid. There’s absolutely none of the classic car delicacy that might betray its 1990s roots; it just feels robust, like it wants to be driven hard.

Pander to this invitation and you are treated to the most spectacular and overwhelming flood of mechanical sensations. A small twitch of your foot unleashes a loud, angry, gravelly sound that’s equal parts induction and exhaust noise; typical of a flat-six Porsche engine. The revs then continue to rise at a startling rate, not losing any enthusiasm right to the 8350rpm limit.

At which point you have to interrupt the engine’s revelry for a gear change. The instant you disengage the clutch the revs drop instantly. This feel of inertia-free rotating mass is typically the preserve of 1-litre superbike engines, but here you'll find it in a 4.2-litre six, and it means instant responses. 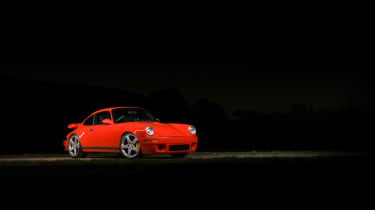 With this momentary respite there’s a brief sense of calm, before a gulp from the engine as the clutch is reengaged and the ferocious yowl perseveres until the red line. These slightly stunted gearchanges might not be the fastest, most efficient or even the easiest to execute, but they are a delight to be a part of and add a character to the car’s noise that no auto or PDK could ever replicate.

As well as trying to appreciate such a sonorous delight, you’re also subjected to fierce and insistent acceleration. But, rather than frightening or intimidating, the SCR’s straight-line performance feels remarkably natural. There’s such an instant and direct correlation between the throttle and the way the Ruf reacts as every single millimeter of pedal travel changes the rate of acceleration by the exact amount you’d expect. You have every increment, between nothing at all to the breathtakingly forceful acceleration of full throttle at your disposal.

The engine certainly dominates the experience, but the chassis is more than capable of holding its own. It’s helped by just how small the SCR feels. The front axle feels especially narrow – not because there’s excessive roll, but because of the amount of space you have to place it on the road. The rear feels notably wider, but still small enough to give you acres of road to use.

The car’s triangular footprint is accentuated by the lack of weight over the front axle. Not only does it bob a little over bumps, but the entire car seems to rotate around a point close to the rear axle when you steer – a sensation that feels so typically Porsche 911.

Of course, being light, the front end needs to be treated considerately; barrel into a corner without actively shifting weight to the front, or powering out of a corner too early, and the tyres won’t find enough purchase on the tarmac. Thankfully the information you get through the steering is so highly detailed that you’d have to actively ignore the explicit signs that the front-end has gone light to then make it understeer.

The suspension is not only firm and controlled, but it also conveys exactly how the car is reacting to the road and your inputs. Ruf has managed, very deftly, to incorporate a modern sense of robustness, quality and usability without filtering out the cacophony of useful information that captivates anyone who loves driving. And by not sanitizing the experience, Ruf has maintained the distinctive 911 traits, too.

The responsiveness of the engine and the confidence you have in the chassis means you drive the SCR in a manner completely ignorant, almost disrespectfully, of its huge power, bespoke carbonfibre bodywork, rarity and expense. Braking late and deep into corners, using that rearward weight bias to pivot the car and tease the front towards an apex. Then making the most of the engine’s punch with a pulse of the throttle to maintain just a degree of attitude all the way around the corner, until finally taking advantage of the rear traction by stamping on the throttle and launching towards the next corner. All of this happens to the most intense motorsport-like soundtrack, and it's utterly enchanting. 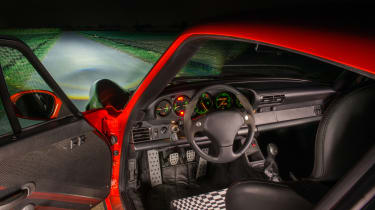 At approximately £495,000 (€590,000), the SCR 4.2 is incredibly expensive. But, if you believe the hype, that’s not dissimilar from the price of a second-hand Porsche 911 R; another raw and involving 911 aimed at true drivers. In all honesty, though, as good as the R is, it doesn’t create the same intense tingling delight that the SCR can. It also doesn’t behave as much like a typical 911 either, something that may well be a benefit to some. The older, and just as ludicrously expensive, 911 GT3 RS 4.0 is closer in terms of intensity and doesn’t hide its 911 roots as much as the later 991 cars.

> Find out what the Porsche 911 R is like to drive

The SCR’s biggest rival is Ruf’s other retro-style, 964-looking creation, the Ultimate. It looks much the same, has a similar ethos behind it and full carbonfibre bodywork, too. However, it’s even more powerful thanks to a turbocharged 3.6-litre flat-six that puts out 582bhp. What’s more, it’s aircooled, so even more appealing to those die-hard old-school Porsche fans. We’ll bring you a review of the Ruf Ultimate soon.