Porsche specialist Paul Stephens releases a Le Mans-inspired model based on the 911. 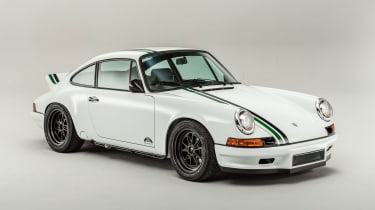 Renowned Porsche specialist Paul Stephens unveiled the Le Mans Classic Clubsport, based on the 911, at a pre-launch event in London last night. Priced around £250,000, only ten will be built to honour the world famous endurance race from which the model draws inspiration.

Work starts on an original Porsche 911 body, which is restored and subsequently built to Clubsport specification. To that end, lighter body panels and parts are fitted to the Le Mans Classic Clubsport including: a de-seamed roof panel (including sunroof delete), composite bumpers and engine cover, an aluminium bonnet and aerodynamically designed wing mirrors.

Peter Auto, the event organiser behind the Le Mans Classic, has partnered with Paul Stephens on the project to provide design influence, hence the car’s white, black and green colour scheme, inspired by the aforementioned, historic racing gathering.

Beneath the discreetly modified body sits an air-cooled 3.4-litre flat-six, which develops 300bhp, courtesy of an advanced injection system, a reprogrammed ECU, GT3 RS-specification camshafts, a lightened and balanced crankshaft and lightweight conrods. As for the drivetrain, there’s a lightweight flywheel and a limited-slip differential which distributes drive, from the five-speed transmission, between the rear wheels.

The Classic Clubsport boasts a top speed of 175mph, although Paul Stephens quotes two 0-62mph sprint times of 4.5 and 4.4sec, which are attributed to the model in Touring and Lightweight guise, respectively. The tenth of a second difference is down to weight – the former tips the scales at 1075kg; the latter at 970kg.

The hundred-plus kilo savings found in the Lightweight come courtesy of lighter carpets, the removal of soundproofing, plastic rear windows, lighter fixed-back seats and manual front windows, while the central locking is axed as well. Weight-saving measures don’t stop there, as the glove box and passenger sun-visor are ditched, too.