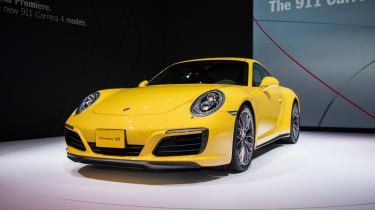 The Porsche 911 Carrera 4 and Targa 4 are the latest 991 models to receive the all-new turbocharged powerplant that made its debut last month in the regular 911 Carrera – as the majority of the 911 range moves towards forced induction.

At the same time, the Carrera 4 and Targa 4 gain other advancements made to the range when the turbocharged flat-six engines were introduced, from small styling tweaks to further improvements in the chassis.

Those styling tweaks include a new, distinctive rear light strip between the rear light units, boasting a ‘three-dimensional design’. The rear arches are once again 44mm wider than those of two-wheel drive models, while the rear engine lid features the same changes made to the regular Carrera. 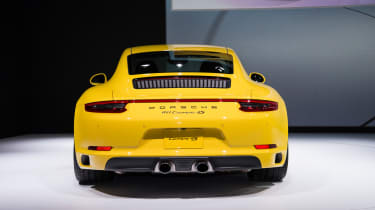 The wide ranging improvements actually give the Carrera 4 an on-paper advantage over two-wheel drive 911s for the first time. With electro-hydraulically controlled all-wheel drive, PDK and the Sport Chrono package, the Carrera 4 reaches 62mph in 4.1sec from rest (0.4sec quicker than its predecessor), while the Carrera 4S manages the same sprint in 3.8sec.

The heavier cabriolet and Targa 4 are also quicker, only 0.2sec shy of their closed-roof counterparts, while top speeds vary between 178mph and 190mph depending on model. 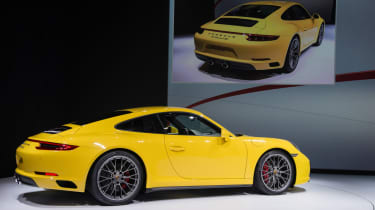 The other benefit of modern turbocharging is fuel efficiency, which climbs to 36.7mpg in the PDK-equipped Carrera 4, not far off the 38.2mpg claimed of the two-wheel drive Carrera.

In addition to the new engines, the optional and performance-enhancing Sport Chrono package has also been revised, taking inspiration from that of the 918 Spyder. It gives drivers a mode switch on the steering wheel, to select between Normal, Sport, Sport Plus and Individual driving modes.

In Individual mode, drivers can choose their own preferences for PASM, the active engine mounts, shifting modes on the PDK transmission, and the sports exhaust system. An additional Sport Response Button on PDK models pre-conditions the drivetrain for maximum acceleration for 20 seconds – aiding overtaking, for example. 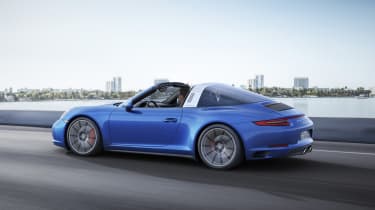 PASM too has been adjusted for the new car, with a 10mm lower ride height as standard, greater sensitivity to the all-wheel drive system and complemented by new dampers for greater body control. Rear-axle steering – as found on GT3 models – also joins the options list, while a hydraulic lift system raises the nose 40mm to cope with speed bumps and steep driveways.

Inside, an improved PCM connectivity and infotainment system – with improved smartphone integration and a wider range of internet-based services – joins a more tactile steering wheel, like that of the 918 Spyder. In standard specification it has a 375mm rim, though a 360mm GT sports wheel is optional.

UK pricing hasn’t yet been confirmed – German pricing begins at 103,983 euros – with deliveries starting on the continent in January 2016.