New ‘basic’ Carrera gets 380bhp, but with no sign of a manual transmission, yet 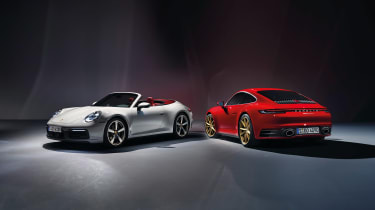 Porsche has revealed details of the entry-level 911 Carrera Coupe and Cabriolet due to join the range. Sharing many of the same core components, the standard Carrera will feature a slightly less potent version of the Carrera S’s twin-turbocharged flat-six engine, with a few downgraded chassis elements to coincide with a slightly lower price point.

Unfortunately, there has been no corresponding news of the promised manual transmission, which Porsche still insists is on its way. So for now, the Porsche 911 Carrera S’s outputs and weight have been subtly toned down for this new base 911.

> Click here for our review of the 992 Carrera S

Power is still generous, mind, with the identical 3-litre twin-turbocharged flat-six engine rated at 380bhp, compared to the S’s 444bhp, allowing the standard Carrera to reach 62mph from rest in 4.2sec, 0.5sec slower than the equivalent Carrera S. The core flat-six engine is ostensibly the same as in the Carrera S, but does feature smaller turbine wheels inside the turbocharger housings, which should improve response thanks to less internal inertia.

As mentioned above, details of this standard Carrera have not coincided with news of the incoming manual transmission, so for the moment the Carrera, like the rest of the range, is only available with Porsche’s slick eight-speed dual-clutch PDK transmission. Weight is rated at 1505kg, 10kg down on the Carrera S.

The wheel and tyre package is slightly smaller than standard at 19 and 20 inches at the front and rear respectively, riding on 235/40 ZR19 and 295/35 ZR20 rubber. The brakes behind them are also slightly smaller four-piston units, gripping 330mm discs on all four wheels.

The rest of the package is otherwise unchanged, with the same high quality interior, 10.9-inch PCM infotainment system and central rev counter flanked by two high-definition displays inside, and the same wider bodyshell.

From the outside, only those smaller wheels (which most will likely upgrade to the larger Carrera S size anyway) and new oblong-shaped exhaust outlets give the game away that this is the basic Carrera – not counting the badging of course. Further details about the Carrera 4 will be revealed later this year.

Cars will reach UK customers later in the year, with prices starting at £83,793 for the Coupe, and £92,438 for the Cabriolet, around £10k more than the Carrera S Coupe and Cabriolet respectively.