The much modified Series 2 997 GT3 performance car is unveiled 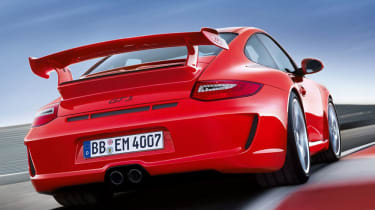 Porsche has revealed the new 911 GT3. It’s the second 997 iteration of our favourite real-world 911, but it’s more than just a mere facelift.

The headline news sits at the very back of the car. The engine is new; still a flat six, but up to 3.8 litres with power hiked 20bhp to 429bhp. Mid-range torque is also improved by tweaking cylinder head gas flow. It means performance gets a shove in the right direction: 0-62mph now takes 4.1sec, 99mph arrives in 8.2sec and top speed is up slightly at 194mph.

Porsche has also made moves to make this the hardest and most dynamic GT3 yet. There’s a new version of PSM (Porsche Stability Management) that allows the stability and traction control systems to be turned off completely. The rather similar sounding PASM (Porsche Active Suspension Management) boasts stiffer springs and anti-roll bars in sport mode but a more compliant ride for everyday use in its normal setting.

There’s modified aerodynamics with front and rear downforce boosted and boasts that overall air pressure pushing down on the car is more than twice that of the current 997 GT3. There are larger yet lighter brake discs that help lessen unsprung weight, which is also reduced via new, lighter alloys. PCCB (or if you prefer, ceramic brakes) is on the options list, with a version of the acclaimed braking system designed specifically for the new GT3.

There are options for the many 911 buyers who take their cars on the track, too. They can specify PADM – yet another acronym that basically stands for engine mounts. The regular, ‘elastic’ engine mounts can be replaced with harder, more resistant ones which reduce the effect of mass forces from the rear-mounted drivetrain, improving traction through bends and when accelerating. Also on the options list is a front-axle lift that raises ground clearance by a useful 30mm for bumpy surfaces and for aid in clearing inconvenient speed humps.

Not on the options list is PDK, Porsche's double-clutch gearbox. For now at least the GT3 is a manual-only car.