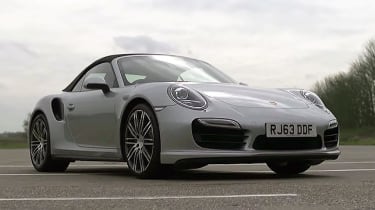 The Nissan GT-R is often used in conversation as a benchmark for performance. Since it was launched in 2007, there has been little short of a Bugatti Veyron that could touch it in terms of pure acceleration.

Our latest Drag Battle, the first in a new series, puts the Nissan GT-R (2013 model year) against the new Porsche 911 Turbo Cabriolet (991 generation). The Porsche boasts 513bhp and 524lb ft, compared to the GT-R’s 542bhp and 466lb ft of torque. There is a significant weight difference between the two also, with the 911 weighing in at 1665kg, and the notoriously hefty GT-R weighing 1730kg.

Launch control is utilised on both cars for the drag race. Both systems are easy to activate, although most manufacturers don’t recommend its use for extended periods, due to the added strain it can put on the drivetrain. For the 911, select the Sport Plus mode, and engage drive. With your left foot on the brake, floor the throttle, and when ready release the brake. The GT-R is similarly simple. Select Race mode for the transmission and traction control. We selected Comfort mode for the dampers, as this can also aid traction off the line.

The timing was conducted at the Bruntingthorpe testing facility, which offers a notoriously tricky surface for launching cars. The two-mile straight allows plenty of space to run the cars, with our test running to 1000m. Both cars were individually timed over several runs, and ran surprisingly consistent times on each run. The full timing data below represents the quickest run for each car: