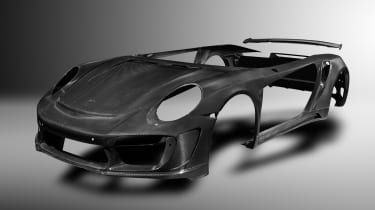 Without stripping out the 911’s day-to-day niceties there aren’t many ways of shedding weight, but Russian tuning firm Topcar has a solution in the form of a full carbonfibre panel kit.

Called the Stinger GTR kit, it comprises 30 different components, manufactured using vacuum forming technology. The kit will be pre-assembled before delivery to ensure all parts fit snugly with their counterparts.

At this early stage, Topcar hasn’t revealed potential weight savings, though given how much of the car’s stock bodywork can be replaced – front and rear wings and bumpers, door frames, rear wing and the front bonnet – the gains could be quite healthy.

Owners with the older 997 suggest a carbonfibre bonnet alone is around quarter of the weight of the standard item, for example.

No prices have been revealed for the kit – it’s unlikely to be cheap – but we should find out more on both the cost and the weight at the Geneva motor show, where Topcar will display its wares alongside other tuning companies such as Mansory and Hamann.

The firm will also display a new kit for the Mercedes-Benz GLE Coupe at the show, the styling of which is sure to be as divisive as the GLE itself.