Most powerful Porsche ever 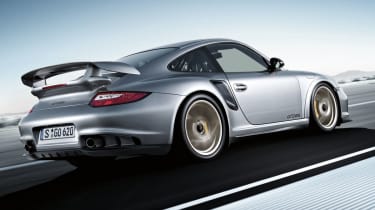 Porsche has revealed its most powerful production car yet. And perhaps surprisingly, the accolade goes to a 911, rather than a Carrera GT replacement. Meet the encouragingly unhinged GT2 RS, the maddest Porsche in a good while and yet another hardcore supercar to join the Audi R8 GT, Lamborghini LP570-4 Superleggera and Ferrari 599 GTO that 2010 has already produced. The headline figures are certainly eye-grabbing – 611bhp, 516lb ft, 205mph and 0-62mph in 3.5sec are the stuff of hypercars. They all match or improve upon the iconic Porsche Carrera GT, but in a car that’ll cost half as much new. £164,107 may not sound cheap, but the 911 GT2 RS could be considered a bit of a bargain when you take into account its performance. 0-100mph takes less than seven seconds. Power comes from a tweaked version of the previous generation 997 GT2’s engine, a 3.6-litre, twin-turbocharged flat six. It’s transferred to the road via a six-speed manual gearbox and rear-wheel drive, the latter responsible for a 0-62mph time that’s slower than the significantly less powered (but four-wheel drive) 911 Turbo. Find out its startling acceleration time on this video… Like its 911 GT3 RS sibling, the GT2 RS’s reason for being isn’t solely its extra grunt. Weight-loss is key, too, and 70 kilos has been cut compared to the outgoing GT2. Use of lightweight carbonfibre-reinforced plastic for everything from the rear spoiler lip to the bucket seats all adds up, while the regular battery is replaced by a lithium ion item, the rear and side windows are polycarbonate and the rear suspension arms are aluminium. Lighter alloy wheels shroud standard composite ceramic brakes. There’s a sharper, ‘RS’ set-up for the springs, suspension management and anti-roll bars as well as the trick engine mounts that improve body control further at high speed. As far as the exterior goes, you might struggle to set the GT2 RS apart from its more regular counterpart, with new air intakes and carbonfibre elements the main tell-tale signs. Side graphics (far more subtle than those sported by the GT3) also point out which 911 this is. Curiously, Porsche is also claiming improved fuel economy and carbon emission figures. Just 500 GT2 RSs will be made worldwide, with UK sales beginning in September 2010.

Video of the Porsche GT3 RS battling the Ferrari 458