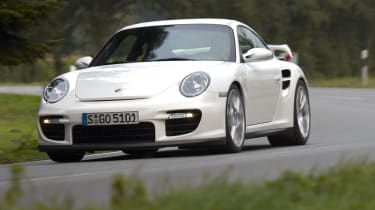 What was I thinking? I delve into my small overnight bag, ease the washbag and change of clothes to one side and squeeze in a pair of thin-soled pumps. As I drive to the airport I am inordinately pleased with myself. It’s not as if I’d remembered my passport at the last minute; I could have driven the new GT2 in the Blundstones I wear most days, but I now feel properly prepared for the encounter.

‘GT2’ evokes sweet and sour emotions. There have been two previous versions; the original, the 993 homologation special with its screwed-on bubble arches, was a blast, a steely-edged racer with a turbocharged 430bhp flat-six, rear-wheel drive and carpets. It’s probably the rawest of all road-going 911s, and with fewer than 250 built, as rare as rocking horse bobbins.

The second, the 996 GT2, had no competition remit and was visually much less exciting, but it had the potential to combine the dynamic precision of the sublime 996 GT3 with the kick of the Turbo, and then some. The edge here was provided by 455 turbocharged bhp and the lack of Porsche Stability Management, but it felt like a blunt instrument. We didn’t like its feel and feedback, especially its poorly telegraphed switch between understeer and oversteer (evo 036).

However, more recent exposure has suggested that the suspension settings on the press cars (questioned at the time and apparently dictated by Germany), may have been less than ideal. Customer cars we’ve driven (most recently in issue 109) have been more predictable and exploitable, somewhat contradicting the ‘widowmaker’ reputation, but let’s not get blasé; a turbocharged, rear-drive 911 with over 450bhp and no traction control demands respect.

And so to the third-generation GT2. For the first time it’s loaded with the electronic goodies enjoyed by lesser models, though PASM (Porsche Active Suspension Management) and PSM in particular are tailored to its unique character. As with the second GT2, its development has not been shaped by the demands and regulations of a race category and at first glance it looks quite tame, just another iteration of the high-performance 911 with its gaping-mouthed, more ground-hugging nose, and different bi-plane rear spoiler.

However, the longer you look and the more you contemplate the numbers, the more menacing the new GT2 seems. Oh, and white is the colour, no question. Initially you don’t notice the slightly nose-down rake, or the fact that the wide, Turbo rear arches are brimful of rubber. Step closer and you see that those rear tyres are 325/30 ZR19s – for reference, a Lamborghini Murciélago wears 335s – and then that they’re lightly treaded Michelin Pilot Sport Cups.

That new rear spoiler is a bit special, too. Like the 993 GT2’s, it’s hollow and the intakes that sit in the air flow deliver pressurised air to the engine, contributing to its greater output over the Turbo. With revised variable-vane turbos and a new expansion-type intake manifold (that even the Porsche engineers have difficulty explaining), its flat-six develops 51bhp more than the Turbo’s, no less than 523bhp.

There’s some visual evidence of the 145kg weight reduction over the Turbo; the standard-fit PCCB brakes, the new tilt-back carbon-shell seats, the lack of rear seats, and a rear silencer and tailpipes made of titanium. Out of sight there’s a new aluminium rear suspension subframe and, of course, just rear-wheel drive. Even so, Porsche claims the GT2 will get from standstill to 100kph (62mph) in just 3.7sec, while all-out in sixth it reaches 204mph.

The 996 GT2 was good for an impressive 196mph, but 4mph the other side of 200 commands more attention, not least because Porsche’s full-on supercar, the Carrera GT, does 205mph. And around the Nordschleife? Well, the GT2 has been timed at 7min 32sec, making it five seconds a lap faster, than the CGT, and it’s a whole heap easier to drive too, according to Walter Röhrl. Five or six seconds of that time is down to the Cup tyres, he reckons, but he adds that the GT2 has the best-controlled rear end of any 911 he’s driven.

On start-up the GT2 sounds deceptively like any other 911, the effect of the titanium exhaust more physical than aural – it saves 9kg at the very rear of the car, and, being more compact, keeps the heat further away from vulnerable components such at the plastic rear bumper. The new lightweight seats are superbly shaped, while the rest of the trim, with Alcantara highlights, is much as you’ll find in a GT3.

As you’d hope, the GT2 also has the GT3’s satisfying feeling of quality, not just in terms of tight build and underlying structural integrity but in the precision and feel of its controls. The gearbox is obviously more heavyweight to handle the humungous 501lb ft of torque that the engine can summon up between 2200 and 4500rpm, and this is reflected in the shift action, which is firm, short and deliciously tactile. Brake pedal feel is superb too, with no hint of lost motion at the top of the pedal yet a progression that allows you to measure light and heavy stops effortlessly.

The ride is notably calm too, though the roads around the launch venue near Bremen in northern Germany appear to be specimen-quality exhibits from the Museum of Asphalt. Coming from Britain, it’s hard to believe that roads so perfectly flat and finely textured criss-cross this flat, rural landscape. They make Silverstone feel a bit lumpy and make it difficult to judge how the GT2 will feel in the UK. Yet although they’re so smooth, the comfortably weighted, accurate steering does seem to pick up on certain imperfections where they exist. It’s a mild effect, like when you get caught in the grooves trucks leave on the inside lanes of some motorways, and suggests that there’s less compliance in the suspension joints and rack mounts.

While the minor roads lack character, the nearby autobahn gives plenty of scope for exercising the flat-six which, let’s be honest, is what you want to do as soon as you’ve got the key in your hand. Maybe it's the lack of rear seats and the pared-down sound- deadening, but the GT2’s twin turbos are gloriously vocal compared with the Turbo’s. Pressing the throttle to the stop from low revs in a high gear and then backing off just as the boost starts to build elicits a variety of chuffs and hisses. Keep it nailed and the pulse of the flat-six is underscored by the sound of twin torrents of hot, spent gases blasting from the tailpipes. Apparently.

The kick in the back is sensational, building quickly and smoothly as the rev- counter needle hits 2000rpm and then escalating in ferocity through the mid-range, pinning you to the backrest. And because the vanes of the turbochargers change their profile, giving fast, small-turbo-style response at low engine speeds and big-turbo response at high revs, there is no let-up, peak boost reaching 1.4bar. In fact, as the tacho registers 5000rpm, the engine’s delivery ramps up again and the first couple of times I missed the small yellow upshift light and discovered the abrupt, stuttering rev-limiter.

It’s impressive that the traction control isn’t triggered even in second gear, the fat, soft Cup tyres clinging resolutely to the dry road. Equally inspiring is the rock-steady stability of the GT2 as the speed piles on, tracking dead straight and continuing to accelerate with jaw-dropping determination well into three figures. Porsche claims 100mph comes up in just 7.4sec (we timed the CGT at 7.6sec), while 200kph (124mph) takes 11.2, and 300kph (186mph) 33sec dead. Before we reach our exit on the autobahn, the digital speedo has flashed up the magic 300, and if the road had remained clear I’d have had no qualms about keeping it nailed all the way to its maximum. Incidentally, that new intake strategy, which uses the pulse effect inside the manifold to deliver a cooler charge to the cylinders, promotes better combustion and therefore efficiency, contributing to a remarkable composite mpg figure of 22.6.

The GT2 isn’t the fastest or most powerful 911 I’ve ever driven. A couple of Rufs have power north of 600bhp with rear-drive, and, like them, the GT2 feels like a car you tease at your peril. Accelerating keenly out of the few corners we do manage to find, the GT2 feels stupendously punchy, the massive torque that arrives (after a momentary pause) at the seemingly unstickable rear end loading up the stiff chassis so that it feels like the car is subtly tilted diagonally, outside rear down, inside front up, and the steering seems ever-so-slightly edgy. How easy would it be to catch if the rear was suddenly overwhelmed by the torque right now? That’s the beauty of stability and traction control – if you don’t fancy looking over the edge, you don’t have to. I didn’t. The public road is no place to find out if a 500bhp-plus 911 snaps into oversteer – or if it goes gently at first, before the revs and boost escalate faster than you can wind on the opposite lock. Given the expanse of an airfield to experiment on, I’d give it a go, and there’s a visit to just such a venue on the launch schedule, but only for rides. Still, it is Walter Röhrl at the wheel on the damp/patchily dry concrete.

All aids off, the GT2 is soon power-sliding through the turns, Röhrl chatting away as the rear tyres slip gently into a slide which he holds for a good few yards, explaining that the consistent torque delivery makes it easy to modulate the angle. The damp doesn’t seem too much of a problem. ‘We have made tests and the Cup tyre has 12 per cent more grip in damp conditions than the regular tyre because of its compound,’ he says. ‘It’s only when there is standing water that you have to be very careful.’

Heading into a tightening right at the end of the course, Walter demonstrates that there’s a degree of rear slip on offer if you brake lightly as you turn in, the anti-lock not triggering, enabling the driver to tighten the line and, if desired, pick up the throttle and flow seamlessly into another power slide. This adjustability is why you can disable the GT2’s stability and traction controls separately. ‘Most drivers lose a car under power,’ one Porsche engineer explained. Encouraged, I found a quiet corner of the decommissioned base to have a go myself and can report that, yes, the GT2 does break grip progressively and can be held with confidence. It felt a little sharper as the tyres recovered grip and I reckon it would be only a very confident driver who’d happily switch off all aids on the road.

In many respects the GT2 is a truly incredible car, not least because it packs the performance of the 600bhp Carrera GT into a 911 shell, and then shows the mid-engined car the way round the Nürburgring. It’s a supercar in concentrated form and from this perspective £130,000 doesn’t seem expensive. What’s impossible to decide is if the GT2 is the 911 of choice compared with the brilliant GT3. The roads south of Bremen were so smooth it’s simply not possible to say with any conviction how the GT2 will feel on UK roads. Only one thing’s for certain: it’ll feel chuffing fast.