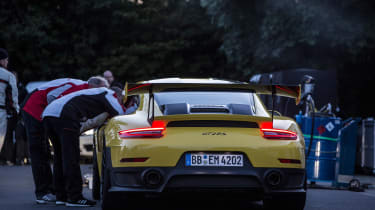 The Porsche GT2 RS has gone up against the clock at the Nürburgring, officially lapping the 12.9-mile circuit in 6 minutes, 47.3 seconds – a new record for a road-approved sports car.

The record time apparently surpassed the expectations of Porsche's classically understated development team headed by Vice President of GT cars saying: “At the start of the development process, we set ourselves a lap time target for the GT2 RS of less than 7 minutes and 5 seconds. The credit for beating this target by 17.7 seconds goes to our development engineers, mechanics and drivers, who demonstrated an exceptionally strong team performance. This result makes it official: The GT2 RS is not only the most powerful, but also the fastest 911 ever built.”

This performance puts the Porsche 911 GT2 RS ahead of the controversial time set by the Lamborghini's Huracan Performante, which cut through the Eifel forest in 6:52, four seconds behind the Radical SR8 LM (on par with the GT2 RS) with Pagani’s extreme Zonda R only a further second quicker.

If there were a 911 that could inhabit the title of being the fastest 911 ever, it would be the new GT2 RS. Its blown 3.8-litre starts out in Porsche Turbo S specification, before Andreas Preuninger and his small band of engineers find an extra 120bhp from the flat-six. Gains are courtesy of uprated turbos and associated ancillaries that have already propelled Mark Webber to 208mph down the ‘Ring’s back straight.

This time gives the RS internal bragging rights, too. The Porsche GT3 991.2 traversed the North Loop in 7:12, someway short of the GT2 RS, a given in light of the 155lb ft torque deficit suffered by the naturally aspirated GT3. Perhaps, even more startling is the comprehensive margin by which the GT2 RS undercut the Porsche 918 Spyder – the technological tour de force slithered round the Nürburgring in 6:58, some 10sec slower. The 200kg weight advantage boasted by the GT2 RS over the 875bhp 918 Spyder, and its extrovert aerodynamics go some way to nullifying its (relative) power shortage. 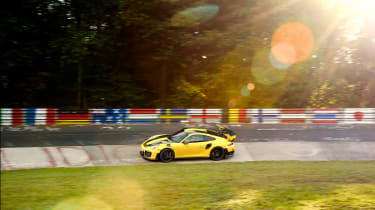 Benchmarking the new RS against its predecessor (997.2 GT2 RS) on the timing sheets demonstrates the significant performance leap made by the 991 GT2 RS. The 997.2 managed a time of 7:18. So far we’ve only experienced the new Porsche GT2 RS from the passenger seat, but, we’ll be driving it in November 2017.