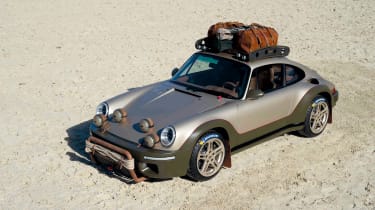 The Porsche Cayenne is all well and good, but with road-biased, high-performance tyres and complex hybrid tech, it’s not quite as well suited to loose surfaces as some may believe... Though only a concept at present, long-time Porsche specialist RUF has devised a better alternative – the 911-based, off-road Rodeo.

One of the longest-standing tuners in the business (technically a manufacturer by German regulations), RUF has produced some of the greatest non-standard cars we’ve seen, from the 236mph CTR3 Clubsport, to the 463bhp CTR Yellowbird. Alongside the launch of the very first production RUF SCR, it’s now going off-road with the Rodeo.

Though built upon the same carbonfibre monocoque chassis as the very latest models, the concept boasts a number of modifications to help it better cope off the beaten track. Unlike with its siblings, power is sent to all four wheels as standard, all of which are wrapped in large, all-terrain Michelin tyres for optimum traction.

Power comes from a choice of flat-sixes in either turbocharged or naturally aspirated configurations, likely producing around 500bhp based on the output of recent models. The new SCR’s 4-litre naturally aspirated unit puts 503bhp and 347lb ft of torque to the rear wheels, for example, good for a 199mph top speed. Though we doubt it would match this performance, the Rodeo Concept should be a rather capable off-roader nonetheless. 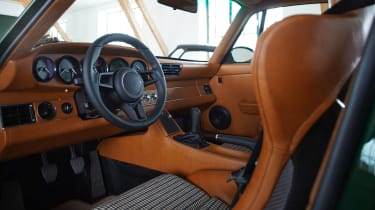 RUF marketing director Estonia Ruf said: ‘The Rodeo Concept combines that passion for cars with the love of western culture – an appreciation I found while studying in Oklahoma, USA. This car is inspired by some of our favourite people and our love for the countryside.’

Helping the machine withstand the demands of uneven terrain, long-travel suspension has been equipped for better shock absorption and increased ground clearance. Should a fallen tree block your path, the included bull bar will come in handy, as will the tow rope for when the going gets tough.

As if all of the above wasn’t enough to win you over, the concept is also equipped with quad rally-style fog lights, and most notably, a spade.

No information on a future production version has been released.