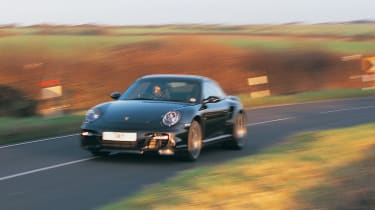 A rather strange thing has happened to the 997 Turbo: it has been slightly eclipsed. While the GT3 swanned off on our Car of the Year event (evo 099) and then got invited to join motoring royalty at our greatest ever group test (100), the Turbo has had to stand in the wings. It’s not that we don’t like the Turbo – far from it – it’s just that it doesn’t have the steering feel of the GT3, nor the wonderfully savage engine note. And, ultimately, sheer grip isn’t as beguiling as rear-wheel drive. To rub salt into the wound, the inclusion of active suspension on the new GT3 means that it has even muscled in on the Turbo’s comfort trump card.

But there is one area where the Turbo is still very much king of the castle. If you want a haymaker to the base of your spine and acceleration that makes it slightly difficult to think properly then there’s nothing like a bit of forced induction. Compare the in-gear times (issues 094 and 103) and you’ll see that the Turbo has the GT3 licked.

If you’re buying a Turbo for its acceleration, you might as well make it as strong as possible, which is where DMS comes in. The Southampton-based company does discreet tuning, and from the outside you wouldn’t know that this car had been touched. It’s the same story inside. There are carbonfibre highlights (I particularly like the steering wheel), and yellow dials and seatbelts (which sound hideous but actually look great against the otherwise plain-black interior), but all of this can be ordered direct from Porsche.

The DMS changes are all under the engine cover, where an extra 62bhp and 89lb ft of torque have been liberated through an ECU upgrade and a new exhaust (£2350 and £2644 respectively, including VAT and fitting). Even here things are kept discreet: the standard turbos have been retained and none of the electronic fiddling can be detected by Porsche’s diagnostics. For those happier to stray further from the standard car, there’s also the option of bigger variable turbine geometry turbos and over 600bhp, but as DMS’s Rob Young points out, the car we have here is more representative of what the vast majority of his customers want.

Fire-up the flat-six and the differences start to reveal themselves. One of the disappointments of the standard car is that it doesn’t quite sound angry enough given the way it flings you towards the horizon. The Four Horsemen of the Apocalypse deserve to be ushered in with a decent soundtrack, and the new exhaust ensures that happens. Importantly, though, it still manages not to be intrusive when you’re merely cruising across a continent.

Not that the Turbo is really about cruising. It’s all about the big – bigger in the DMS – addictive rush as the needle passes 3000rpm and the turbos wake up. Nail the throttle in any gear and there’s a momentary gathering of breath to serve as a warning before, without any danger of a scrap of it being wasted, all 534bhp simply explodes, the digital speedo becoming a blur of scrambled digits.

Corners need patience, but Porsche’s (optional) ceramic composite discs allow you to brake oh-so-deep into them, which in turn helps point that light nose towards the apex. From that point on you can squeeze the throttle open, feeling the boost building in the turbos and the tyres smearing slightly as you wind off the lock. After which it’s goodbye GT3.

If you can afford a Turbo, you can happily afford the DMS tweaks, which seamlessly improve the Turbo’s best asset and rectify one of its slight weaknesses. There’s really no reason not to.