997 Porsche 911 Turbo Cabriolet review - is the Turbo better without a roof?

The top 911 loses its head but surprisingly not its edge 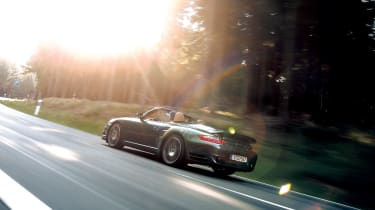 All right, I was sceptical. So sceptical in fact that I drove the Tiptronic first, just because I thought it would be ‘that sort of car’. The sort of car for people who want to be seen in the most expensive 911, rather than people who actually enjoy driving. It’s nice to be proved wrong sometimes…

The first Turbo Cabriolet appeared in stockbrokers’ garages in 1987 with a four-speed gearbox, rear-wheel drive, 300bhp from its 3.3-litre flat-six and a 0-62mph time of 5.4sec. Twenty years later and the new 3.6-litre Turbo Cabriolet is capable of 0-62mph in four seconds if you choose the manual and (slightly gallingly) 3.8sec if you choose the Tiptronic. Two decades, 1.6 seconds.

But that, of course, isn’t the whole story. There’s another 31mph on the V-max for a start, two extra cogs in the manual ’box and four-wheel drive. The roof is now fully electric and performs its gymnastics to stow or erect in 20 seconds. It can even do this whilst travelling at up to 30mph, which is handy if the traffic lights change.

Perhaps a more impressive comparison is with the current 997 Turbo Coupe. The 0-62 is identical and so (with the hood up) is the drag coefficient of 0.31 (although the Cabrio’s rear wing reaches 30mm further into the breeze when it’s extended). The Cabriolet weighs only 70kg more than the coupe, taking it up to 1655kg for the manual (1690kg for the Tiptronic) or five kilos less than the last generation Turbo Cab.

The normal Turbo, I hope you’ll agree, isn’t exactly an elegant car. Purposeful, menacing, big-hipped, yes. Graceful, delicate, elegant, no. This doesn’t bode terribly well for the shape once you’ve taken an angle-grinder to the C-pillars. But the dozen or so cars sitting outside the hotel, marshalled into a sort of automotive rainbow, look much better than I’d expected. They still don’t ooze supermodel beauty but the dimensions seem to retain the core 911 appeal, particularly if you avoid brash primary colours and go for something like a very dark blue or green.

My scepticism was reignited, however, by the first few miles in the Cabrio. With everything in its softest setting and at a pace gentle enough for everyone to see who was driving, the trip through a small town revealed numerous shakes, shudders and wobbles. Just out of interest I tried the PASM dampers in sport mode. The ride firmed but at the same time the shudders seemed to recede from wobbly shakes to mild tremors. So far, so curious. 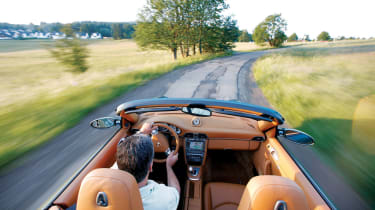 The launch was based just outside Frankfurt and the roads were a fast and fantastic mixture. Stuck behind some traffic at about 60mph the Turbo was still picking up more imperfections than necessary from the seemingly billiard-table road surface. But once clear of the dawdlers it began ruthlessly demolishing the road and the shakes disappeared completely. The Turbo Cabriolet, it seems, just doesn’t like idle pottering.

Full throttle in the Turbo releases a sort of inexorable flood of speed. It is sensationally rapid, and awareness of this is only increased by taking away the roof that would normally be between you and the blurring countryside. The standard wind deflector does a good job at eliminating buffeting in the cabin too and it’ll keep doing a good job all the way to 192mph. The only disappointment is the soundtrack – it’s a bit like a very large version of one of those hand-driers you find in public lavs.

Grip is huge in corners but there’s lots of feel through the wheel, too, and the authentic rear-engined balance is still very much there to enjoy, especially if you lift off mid-corner or brake deep into a downhill bend.

By the end of the day my cabriolet scepticism had melted into the slipstream. I’d still have a coupe but I won’t look so scornfully on the 40 per cent of Turbo owners that choose the open-air experience.