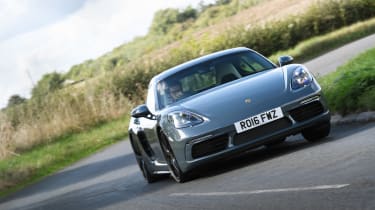 This is now the entry point to new Porsche ownership. Costing a whisker under £40,000 this base Cayman with a manual gearbox and a 2-litre, turbocharged flat four is the cheapest Porsche you can buy. It certainly doesn’t look bargain basement.

The biggest news with this 718-generation of Cayman and Boxster is the reduction in the number of cylinders in the engine from six to four. Compared to the faster, more expensive Cayman S, the base car not only has less swept volume in each cylinder, but the turbochargers also do without variable geometry. The forced induction has ensured that the 0-60mph time is lower than ever at an impressive 5.1sec (and it’s quicker still if you spec the PDK ‘box) but few would argue that this is compensation enough for the loss of the naturally aspirated six’s soundtrack. 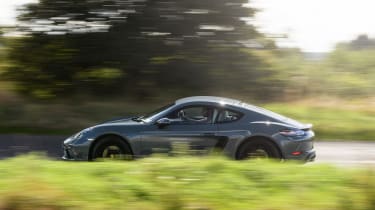 The latest PCM (infotainment system in relatively normal parlance) has a sleek screen and is easy to use. Apple CarPlay was all ready to go, but there was no DAB radio in this base model, which was surprising. Some of the buttons that used to live near the gear lever have now been moved to a small rotary switch that sits within the lower right-hand section of the steering wheel. This makes it easier to toggle between the Normal, Sport and Sport Plus settings.

It will be no surprise that the general gist of this section will proceed along the lines of chassis good, engine bad. There are nuances within that assessment however, so do read on.

To drive a Cayman has always been to experience wonderful balance and supreme fluidity, with the small mid-engine Porsche getting down a twisting road with more grace and poise than almost anything else. Nothing has changed in that regard with the 718 and there is almost an argument that access to the chassis is worth the £40,000 price tag on its own. The way you can pour it through a corner with the grip smoothly transitioning between the tyres is sublime. 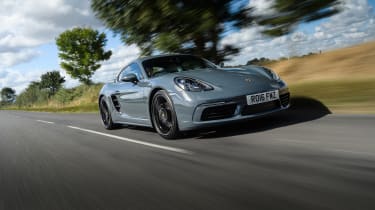 The engine certainly provides enough punch to get you down the road too. Despite this being the lowest rung on the Porsche ladder it doesn’t feel in any way slow and in most situations as you make your way down a road you can just enjoy the meaty mid-range of the torque. You do, however, notice the simpler geometry of the turbochargers more than you might imagine because there is really nothing below 2000rpm and as a result pulling away from a standstill can feel slightly laborious. At the other end of the scale as the revs begin reaching for the red line, the engine is stunningly responsive but it sounds harsh and very unappealing. Our test car had the optional sports exhaust, but I only switched it to its louder setting twice – once to test it and a second time just to make sure.

Happily the standard six-speed manual gearbox remains one of if not the best in the business and using it in combination with the three perfectly positioned pedals is the sort of interactive experience that will always rank above a paddle shift (it’s a major reason why we enjoyed this more than the PDK-equipped 718 Boxster we tested). One of the few benefits of the engine’s uninspiring top end is that you can enjoy using the gearshift more too. With no encouragement to rev beyond 5000rpm, you can be in 4th gear by 70mph without feeling like you’re missing out. 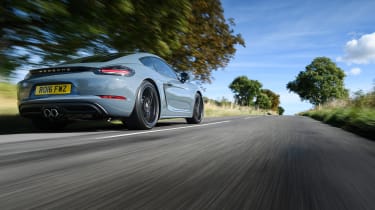 Overall I still really enjoyed my time in the 718 Cayman, because so much of the experience remains sublime with weightings and sensations that make you glad you can drive. Even the standard seats are great. It’s just a shame that new flat-four means it’s no longer the complete package it used to be.

The Cayman now starts at £39,878, which leaves you with an interesting selection of rivals. Audi’s TTS is available for similar money and shouldn’t be dismissed quite as quickly as you might think. BMW’s M2 is a little more expensive at just over £44,000 but does have an additional two cylinders. It’s still not the most memorable engine, but its playful chassis is very appealing if not quite as composed as the Porsche’s down a bumpy road.

The colour of the car in these photos is called Graphite blue. Yes, blue. We know it looks grey, but the paint chart says otherwise. Regardless, it looks lovely.