‘Entry-level’ Cayman is good – but is it good enough? 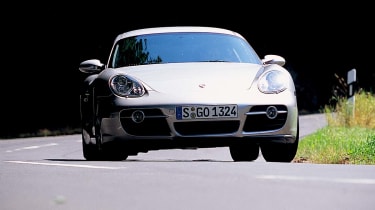 The new Porsche Cayman has 241bhp and costs £36,220. For some people those two salient facts will be enough for them to disregard Porsche’s entry-level coupe. Truth is, we’re fortunate to live in times of cheap horsepower, affordable performance. A Focus ST, with 222bhp, costs just £17,495 (a lot less if you haggle). Surely, even something with the proud Porsche shield on its nose can’t justify twice that sum for a 19bhp gain? Let’s find out…

The Cayman lifts the 2.7-litre flat-six straight out of its soft-top sibling, the Boxster, Porsche claiming 241bhp at 6500rpm and 201lb ft between 4600 and 6000rpm. Porsche says that’s enough to propel the 1300kg Cayman (the same claimed weight as the Boxster) to 100kph (62mph) in an impressive 6.1 seconds and punch the slippery shape through the air at 162mph. Slightly quicker than the Boxster, and all very encouraging.

Changes from the 300bhp Cayman S include smaller standard wheels (17in), softer rear springs and slimmer anti-roll bars all round. The basic Cayman also has just five forward gears unless you opt for the combined package of PASM suspension and the six-speed ’box (£1426). For all you Porsche spotters, you can also distinguish a basic Cayman by its black (instead of red) brake callipers, single exhaust pipe and black (instead of silver) front lip spoiler. Although the lack of an ‘S’ after the Cayman badge on the boot is the biggest giveaway…

Our test car has 17in wheels, but is specced with Porsche’s PASM electronic damper control and hence the six-speed ‘box. It looks great. Wheels seem to be growing exponentially at the moment, so it’s refreshing to see a car with plump, 50-profile rubber. It gives the Cayman an almost retro look, but also the tantalising promise of a supple, fluid chassis. I wonder how many Caymans you’ll actually see running around on the dinky 17s?

Pull the door shut with a thunk, twist the key and hear the flat-six wake with a mellow, crisp howl; snick the gearlever into first and feel the precision of the clutch and accelerator. Yep, it’s a proper Porsche. As you move away you’ll notice the tight, controlled way in which the Cayman absorbs the road surface, letting you know just enough about what’s under-tyre whilst filtering out the really nasty stuff. You’ll feel the rigidity of the structure, the way the Cayman seems impervious to the sort of ravaged roads that would have something like a Z4 Coupe bouncing and weaving all over the place. Maybe that price-tag isn’t so over-inflated.

But, and it is a very big but… when you’ve felt just how fluid and capable the chassis is, you desperately crave more power. The 2.7-litre flat-six sounds wonderful and delivers just enough oomph if you can keep it wound tight, but find yourself in the wrong gear as you pull out to overtake another lumbering truck and the Cayman feels… slow.

Can a 160mph car feel slow? When a chassis has such control, such grip and unimpeachable traction and when the engine it’s married to delivers its best when it’s singing towards the rev-limiter, yes it can. The truth is that something like a Focus ST actually feels quicker than the Cayman for much of the time.

Of course if all roads were deserted, clear-sighted and strewn with tricky, medium- and high-speed corners, then the Cayman might just be one of the most entertaining cars you’d ever find. It has glorious steering feel, a nimble, faithful front end that gradually bleeds into understeer at the limit, and with the PASM on its stiffest setting it develops a bit of attitude, the front bobbing 911-style and the rear hunkered down and driving hard into the road. But in the real world, despite all those usual Porsche strengths, it can feel a bit underwhelming.

And that price is tough to swallow. Especially when a Boxster, with the same engine and a slightly less grippy, more indulgent chassis, costs over £3000 less. Despite flashes of brilliance and a deep-seated quality in everything it does, the Cayman just isn’t enough fun to recommend at getting on for £40K. There’s an old saying that power is nothing without control, but too much control and not enough power isn’t the answer either. Save up for the Cayman S or buy a used 911 is my advice.