The Panamera S loses its V8 engine, getting a twin-turbocharged V6 instead 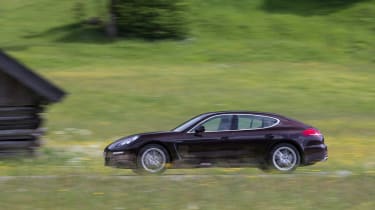 The new, and very slightly different Porsche Panamera. Visual changes from this mid-term facelift are so mild that you’ll need ‘before’ and ‘after’ pictures to spot them – the optional LED headlights are the most obvious clue. Mechanical changes are more interesting, especially the arrival of a new twin-turbocharged 3-litre V6 petrol engine to replace the previous naturally aspirated V8 that powered the S and 4S. The range will be on sale from July 2013, priced from £62,922 for the entry-level diesel to a whopping £107,903 for the Turbo. We tested the mid-ranking 4S, set to cost £85,721.

The new twin-turbocharged engine delivers better numbers than the old V8 pretty much across the board. It boasts 414bhp – a 19bhp increase on before – and the maximum 383lb ft of torque is available from just 1750rpm – in contrast to the previous 369lb ft at 3500rpm. It’s also claimed to be 18 percent more economical – translating into 31.7 mpg on the official test.

Drive is delivered via a standard seven-speed PDK double-clutch gearbox. The compelling, if rarely-chosen, option of a manual gearbox has been dropped. Which is sad.

Although we shouldn’t be surprised at the old V8’s emissions-enforced demise, we should definitely mourn its passing.

Because although the new motor never fails to deliver on the promise of its performance numbers, it lacks much of the character that made the old S the most likeable Panamera. The engine revs smoothly and cleanly, and never feels like the turbos are taking their time to spool up. It’s quick too – a convenient derestricted stretch of Autobahn proving the big saloon’s ability to keep going through the 155mph barrier where speed limiters tend to call time.

What it can’t match is the old V8’s soundtrack, or its sonorous enthusiasm for revs. The Panamera S was one of those cars that had to be worked hard to deliver its best, just like all the best Porsches. The new turbocharged engine is unarguably effective – you can’t fault a two-tonne car that can accelerate to 100mph in just under 11 seconds – but it lacks the excitement of its predecessor. And its soundtrack: the V6s noise is pleasant, but without the hard-edged top end noise of the old V8. Such is progress.

The rest of the driving experience remains pretty much as before. We tested the 4S, which delivered total traction on hot German tarmac – it took some serious speed in slower corners to get the tyres to squeal, let alone let go. The four-wheel drive chassis would doubtless reassure when conditions turn slippery, but we suspect we’d have had more fun, even if we’d travelled slower, in the £3500-cheaper rear-drive Panamera S. The PDK gearbox shifts crisply between ratios, both up and down the box, with its default automatic mode offering a good compromise between aggression and economy. Our fully-loaded test car came with PASM and switchable dampers, and even on super-smooth German roads they felt a little too firm in ‘Sport Plus’.

The Panamera remains a hard car to fit into the market. The BMW M5 is quicker, cheaper and – although a subjective call – vastly better looking than the S and 4S. More to the point, the Panamera GTS, which has sticks with the naturally aspirated V8 engine (for now, at least) is ‘just’ £6700 more expensive. It’s probably become the Panamera to have if you've got the budget and the inclination.

The rest of the range remains as comprehensive as before. The basic Panamera and Panamera S stick with the 3.6-litre naturally aspirated V6 engine, the V6 diesel is unchanged and the range-topping Turbo now has 515bhp. There’s also a new plug-in hybrid, with a total output of 416bhp and a ludicrous 91.1mpg official economy figure. (Achieved, of course, by starting the test with its battery pack fully charged and finishing with it empty.)