How the cars feel on the road often doesn't translate to how good they are on track. Here's what we found out after a day at Bedford 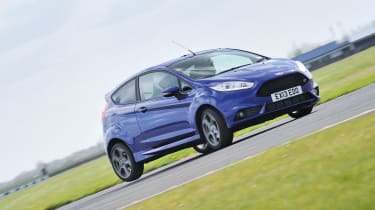 We put all five cars to the sword around the Bedford Autodrome’s West Circuit and four of them were remarkably close on time. However, slowest by over 5sec with a lap of 1:38.7 was the Juke Nismo, which struggled to do any two things at once. This meant that turning and braking, and turning and accelerating, were strictly off the menu, unless you wanted to tie the Nissan in agonising knots. In fact, I can’t remember driving any car with less traction on the exits of corners, and that includes any over-endowed AMG you might care to mention.

Next up, the Peugeot, Clio and Mini all came within 0.3sec of each other. It’s such a negligible margin that I’ll happily admit that they could have swapped places with a smidgen of driver error or inspiration anywhere in their laps, but extracting a fast lap was quite a different proposition in each one. The Clio (1:33.6) had the best chassis balance and brakes, but also felt the heaviest and had the least steering feel. And frustratingly, through a couple of the tighter corners second gear felt too low and third gear felt too high.

Meanwhile, the kart-like Mini (1:33.3) felt the fastest of all the cars with its pointy demeanour, but it couldn’t make the most of its punchy engine until the front wheels were pointing dead straight, being left scrabbling for traction until it was well clear of the corners. It was a lot of fun though.

The Peugeot (1:33.5) definitely felt the softest of the group on track, but it had a better front end than expected and surprisingly found decent drive out of the corners, even on the occasions when the front wheels were over-rotating.

And then came the Fiesta. Quickest by 0.4sec with a time of 1:32.9, it also felt the most fun and the most fluid. It made the best use of the power that it has, finding remarkable traction out of the corners, while also having beautiful feel and balance on the way in. You could trail-brake or just carry speed, and the Ford’s front end seemed willing to turn in, while the stiff rear end was enjoyably mobile. It also had the best-judged ESP system here, allowing plenty of slip in Sport mode.

Perhaps the more shocking figures came when we drove each of the cars slowly up the ramps onto our set of scales. The first point is that the fast-lapping Fiesta was also the lightest of the bunch, backing up the nimble way it dealt with the West Circuit. However, even more noteworthy (and backing up our subjective feelings with some objective figures) is the fact that the Clio came out as the heaviest of the pack. The Renault tipped the scales 101kg heavier than the ST and (worryingly) 7kg bulkier than the Juke.

After all that, we put the VBOX timing gear back on for some straight-line tests and lined up on the main straight of Bedford’s South Circuit (which was part of a runway that had B-17 Flying Fortresses rumbling down it when RAF Thurleigh was the 306th Bombardment Group’s home in the Second World War). This time the Clio felt much more impressive, with an excellent launch control system: Sport mode on, left foot on the brake pedal, pull both paddles towards you until the beep, then nail the throttle, let the revs hover, release the brakes and away you go with just the right amount of wheelspin. A 0-60mph time of 6.92sec was the result, beaten only by the tractable little 208 GTI, which managed a time of 6.79sec.

Again showing off its perfect power-to-traction balance, the Fiesta was the fastest in the initial sprint to 30mph at 2.59sec, just pipping the Pug (2.61sec). But the Ford’s power deficit told as the speeds increased and it was the second slowest to 60mph (7.38sec) and 100mph (18.35sec), beating only the Juke, which was no doubt hampered by aerodynamics akin to a brick outhouse. Fastest to the ton was the rabid Mini in just 16.66sec, over a second faster than the Clio (17.90sec) and almost 3sec quicker than the Juke (19.50sec). All five cars were incredibly well matched in braking from 100mph to a standstill, all taking around 4.5sec to stop and doing so within a couple of metres either side of 100m.

Rarely have we tested a group of cars that are so evenly matched against the stopwatch and yet go about their respective businesses quite so differently. But perhaps the most telling thing from the objective testing is that the top three in the main test were also comfortably the lightest three on the scales.