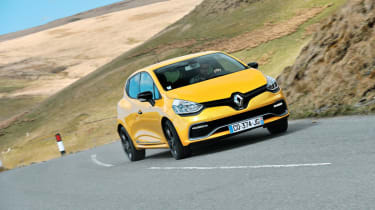 Pretty much whichever way you approach the Elan Valley you’re guaranteed a good drive there. Rewind a few hours and I’m in the Renault for the journey across. It’s an interesting experience. It instantly feels like a bigger car than the previous Clio, but the technology level on the inside has risen almost beyond recognition compared to the relatively sparse 200 of old. Dominating the dash is a large touchscreen that comes to life with an impressive flourish. The satnav is excellent, my phone hooked up seamlessly and it all has the air of a car that would put the tech of quite a few large luxury saloons to shame.

But, this being a Renaultsport, there’s more. Delve into the RS Monitor section and you’ll find more graphs, charts and data than a Maths A-level lesson. It’s like a beautiful, graphically wrought version 2.0 of a Nissan GT-R’s system. And like that Nissan system, it’s all utterly superfluous when you’re driving quickly and making the graphs do interesting things, because you don’t have time to even glance at it.

The other big news in the Clio is the switch from a 2-litre naturally aspirated engine to a turbocharged 1.6 – still with 197bhp – and the gearbox that comes with it. Protruding from the steering column are two plastic paddles that don’t quite feel big enough or sturdy enough, and there are plenty of people worried (just as with the new 911 GT3) that the paddle-shift will make for a less interactive drivers’ car. Personally, I can see that having both hands on the wheel at all times and being able to pop in a late downchange could be fun in the rough and tumble of a hot hatch thrash, but it’ll have to be good. Initially I leave the paddles alone as the miles on the M6 and M5 slide past, and the Clio feels remarkably refined when left shuffling ratios on its own.

Eventually, the sheep quota rises, the road gets more interesting and it becomes obvious that the Clio’s chassis is still a thing of wonder. The steering has less feel than ever, but it is perfectly precise and the car’s nose has so much confidence-inspiring grip to lean on that you feel like you’re working the car around a pivot point directly between the front wheels.

However, although the sensations from the Cup chassis are reassuringly engaging and familiar, there’s also a definite feeling that the old Clio’s edge has been smothered by the inevitable weight gains accrued by the new car’s greater size and that heavier gearbox. Some of the agility has gone and the responses lag behind your requests a fraction as the added mass tries to keep up. The dual-clutcher is certainly not an instant winner either, with shifts taking their time between the pull of a paddle and the swap actually taking place. You can pop in block downshifts by holding the left paddle on the way into a corner, which is clever, but even this takes its time and leaves you feeling slightly bereft of control.