Is the Twingo GT as fun to drive as it is to look at? 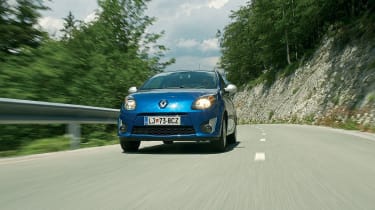 Even the current most-tweaked Twingo, the GT shown here, has a turbocharger. Its engine has a mere 1149cc even though Renault refers to it as a 1.2, and turbocharging it reflects the motor industry’s engine-downsizing tendency (more power, more torque, better fuel efficiency, less weight). The Twingo GT may even be the lowest-CO2 car yet to appear in these pages, with an average of just 140g/km of the plant world’s favourite gas emerging from the tailpipe.

Renault builds Twingos in its Slovenia factory, along with base versions of the previous-model Clio. Makes sense; the Twingo uses the old Clio’s underpinnings beneath its chunky, square-tailed body. But what, actually, is Twingo 2 trying to be? The first Twingo, launched in 1992, was a cheap, frills-free, happy car designed for young buyers who would like its Fisher-Price-like interior design and its one-box, practical shape. Didn’t work; it got bought by mature folk as a second car or city runabout, while the yoofs drove 106s and Saxos. So, this time the Twingo is visually tougher, more attitudinal, more fast-car referential. More ‘male’, actually; the interesting part is that such an approach appeals to both sexes, just as long as they like cars.

Built in Slovenia. And the titchy Fiat is built not in Italy but in Tychy, Poland, alongside the Panda whose platform and mechanicals it broadly shares (as will the new, Fiat-built Ford Ka). Eastern Europe meets Western Europe and the boundary fades away. We’re driving the Twingo on its home patch, and as we head out of Ljubljana I’m actually a bit underwhelmed.

It doesn’t help that the Twingo is nothing like as distinctive to look at as the original was. The GT and its non-turbo Dynamique sibling, the only two versions we get in the UK, do have a racy, trapezoidal front air intake and a pair of faux-Ferrari/Lamborghini vent-shapes either side if it, and the GT even has GT badges in each of them just to make sure you know. But otherwise this is a rather dull-looking little car, a generic small hatchback with an abnormally high scuttle, and the option of graphic tweaks including fragmented stripes and pictures of tulips doesn’t change that fact.

Things are slightly more individual inside, with a central digital speedo (like the old car’s) and a Mini-like tacho-pod dead ahead. You sit high, almost as if in a mini-MPV, surveying the acreage of hard grey plastic all around, wondering if a leather-rimmed steering wheel and aluminium-effect pedals are really enough to merit a GT tag. Maybe rear passengers, if we had any, would have more of a perspective on the grand touring notion, because their sliding/reclining/folding seats offer amazing legroom. But I’m clutching at straws here.

So. Steering? A touch numb. Engine? Quite torquey once past some initial lag; there’s no direct injection so the compression ratio can’t be high enough to make it super-lively off boost. Engine sound? Not great; the turbo whistle rises and falls like the siren of a pursuing police car, but the mechanical sounds are not sweet. At highish revs you’d swear there are two separate engines with separate agendas under the bonnet.

Ah well. At least the Twingo GT is cheap at £9995, and thus far it does seem to ride a lot better than the otherwise splendid Fiat Panda 100HP. But we haven’t really given the Twingo a chance to shine. It’s been motorway and heavy traffic, which might be the way of too much of the modern world but is no help to us.