The flagship Skoda Superb has been refreshed, with an all-new plug-in iV model 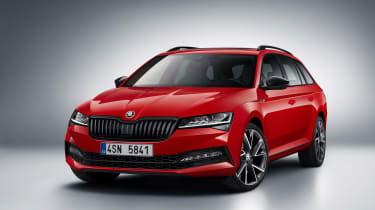 The Skoda Superb has been an unlikely success in recent times, bucking the trend in continuing to be a strong-selling, large, non-premium family hatchback and estate. To keep that momentum going, Skoda has unveiled an update to the Superb, headlined by a new plug-in hybrid variant called the iV.

Changes between the new and old models are relatively subtle, with some new, crisper bumpers front and rear, new lighting units and an updated interior. Despite the mainstream badge, the new Superb is now available with the sort of tech and detailing usually seen on more expensive brands, including Skoda’s first application of matrix LED headlights, and new ornate detailing in the tail lights. Inside, Skoda has given the Superb some light trim tweaks, and updated the car’s active safety components to the latest specifications. The infotainment system has also been updated to Skoda’s latest system.

> The best sports saloons on the market now

The big change is the new plug-in powertrain under the bonnet of the new Superb iV, which not only introduces a plug-in hybrid system to a Skoda for the first time, but also a new iV naming structure that will feature on all future models. The iV’s powertrain combines a 1.4-litre TSI turbocharged petrol engine and an 85kW electric motor. Together, the maximum system output is 215bhp, making this 14bhp more powerful than the similar set-up found in the Golf GTE. The 13kWh battery pack may sound quite small compared to the 90kWh packs in Teslas and the like, but it still allows a theoretical 30-mile range in EV mode, before the petrol motor kicks in. 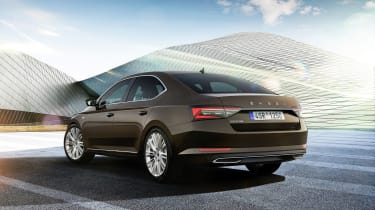 In all, it will be able to travel over 500 miles without refilling – an important statistic considering that many Superbs are used by private hire and taxi companies. The problem is that none of this sounds particularly thrilling, so you’ll be glad to know that Skoda has maintained the sleeper-specification 276bhp turbo petrol version, sharing its EA888 engine with all manner of VW Group performance models such as the Golf R, Audi TT S and Cupra Ateca. A further five engine variants will also be available – two petrol and three diesel.

Skoda has also introduced a new Scout derivative of the Superb Estate, aligning itself with other Skoda Scout models with chunkier styling to the bumpers, a slightly raised ride height and some cladding around the wheel arches.

With sales kicking off later this year, the Superb will be bolstered towards the end of 2019 with an all-new Octavia, which together with the new Scala hatchback will represent a majority of new or significantly refreshed models in the Skoda range.