Anyone else seen the new-shape Impreza on the road? Let Peter Tomalin know... 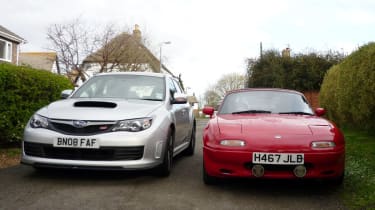 A new addition to the Tomalin fleet this month, and a new chum for the Impreza in the shape of the Grand Challenge MX-5 (or Eunos Roadster to be nerdily accurate, since it’s a Japanese-market import). I fell so much in love with the little red Roadster during the recent series of articles that I just couldn’t bear to see it go when the Challenge ended. So I offered the princely sum of £700 (the mag had paid £801 for it on eBay) and rather to my surprise Lord Metcalfe, who was clearly off-colour that day, agreed. From now on I’ll be sharing the driving not with Challenge team-mate Roger Green but with Mrs Tomalin, who is already seriously smitten with the Mazda too. The plan is to run it for the summer, possibly beyond, and wring as much fun as we can from it while spending as little as possible.

But before any money changed hands, I wanted to do two things. The first was strip off the glassfibre aftermarket sideskirts (never much liked them anyway) and check the condition of the steel sills beneath – they’re the one part of the MX-5 that’s prone to rot. They were fine. The second was to get a fresh MOT, chiefly to check that the emissions weren’t borderline, so a few days later it was off to the local MOT testing station to have the dreaded probe inserted.

I always find it a disproportionately nerve-wracking business, but I needn’t have worried. The Roadster sailed through. Just as the rolling road had suggested back in issue 127 when the Mazda recorded 106bhp ­– just 9bhp down on the manufacturers’ claim despite having 152,000 miles on the clock – there’s plenty of life left in it yet. Roll on the summer!

The STI, meanwhile, is coming towards the end of its time with us, and I’d really like to hear from any of you who have been running one of these. I’ve a feeling there aren’t many of us – I’ve seen just two other new-shape STIs in almost a year. And one can’t help but be seriously worried for Subaru’s prospects here (in February it sold just 46 cars in the UK, and that’s between 90 dealerships. Eek). It’s all a bit of a shame really, because this is by no means a bad car, nor even a middling one. OK, the standard Impreza is pretty lame, and even the WRX is somewhat underwhelming, but the STI definitely has something about it. If you’ve been running one, drop me a line at petert@evo.co.uk