Some sadness as our Impreza goes back. Underrated, dependable, quick and neutral, but ultimately lacking the spark that would have elevated it higher up the desirability league 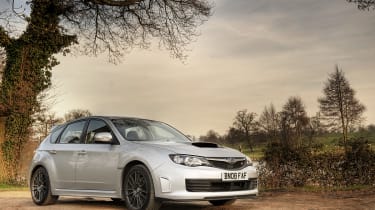 Subaru tore up two decades of heritage when they relaunched the hot Impreza as a hatch, and many diehard Scooby fans still haven’t forgiven them. In 11 months BN08 FAF scarcely received more than a sideways, slightly mistrustful glance from your average old-school Impreza driver. They really should embrace it though, for underneath it’s classic STI, from the 296bhp 2.5-litre flat-four to the super-trick four-wheel drive with its planetary centre diff, electro-magnetic clutch and driver-adjustable torque-split. Not forgetting switchable stability control and a three-mode throttle.

Most days, of course, you’d just jump in and go (assuming you’d fathomed the machiavellian central locking system). You might switch the throttle to Sport Sharp, which made it even more tigerish, but the beauty of this STI is that it’s so damn usable. The boot isn’t huge, but with the back seats folded flat, it swallowed anything from furniture to bicyles to a small jungle of garden waste. The only gadget it lacked was satnav, the controls were light and slick – except for the gearbox which felt reassuringly heavy-duty – the ride was supple, and the throttle in standard mode as progressive and easily modulated as you could wish. Unlike some ultra-powerful hatches, the STI never felt highly strung, always happy to drive to your pace, whatever your mood.

Of course it had a wild side too. We brought that to the fore by dipping back into the options catalogue. We warmed up with the chin spoiler extension at £275. Then we ditched the standard 17in rims for the 18in Prodrive alternative in Anthracite, which came with a tyre change from 235/45 Dunlop SP Sport 01s to 245/40 Michelin Pilot Sports, at a total cost of £1792 (the Dunlops still had plenty of life left in them after about 9000 miles). The Michelins brought a tad less squidge, a bit more precision and extra bite to the turn-in. It was certainly needed – the STI’s steering was better than on the WRX we’d run previously, but still alarmingly light until you got used to it, and woefully lacking in feel even when you had. A shame because in other respects the STI has a very analogue, almost organic feel and character, typified by the torquey motor and the surprisingly pliant suspension that would see the nose rise and dip under acceleration and braking.

I took it on a couple of trackdays where it proved pleasingly neutral, and even I could get the rear sliding out of tight corners by switching out VDC and dialling in some rearward diff bias. The brakes went rumbly, but then it was hitting 135mph on the straight. On the road it was never a crisp, clinical dispatcher of corners. It’s got bags of grip but it leans and pitches more than you’d expect, so in a rapid sequence of direction changes it takes a while to catch up. All-weather, all-surface pace was terrific though.

In February we had the Prodrive Performance Pack fitted at a cost of £1537. Basically a new exhaust from the cat back and a revised ECU, it lifts power from 296 to 325bhp and torque from 300 to 347lb ft. Doesn’t sound heaps, but it really changed the character of the car, with a touch of old-fashioned throttle lag and the power now coming in an increasing rush towards the red line. From 30-70 in a blistering 3.9sec was almost half a second quicker too.

Given the performance on offer, the fuel economy was more than acceptable, ranging from low-20s when I was exploring the newly massaged power curve to a record 28mpg on a long motorway run.

There were some niggles. The air-con, which was either too chilly or too hot. The road roar, which on coarse surfaces could become so intrusive you’d be forced to slow down just to converse without shouting. Most of all the cheap, plasticky cabin ambience despite the Alcantara-trimmed Recaro-style seats (comfily supportive if not quite as body-clamping as they needed to be for really spirited cornering). These things you grudgingly accepted, but really they have no place in a £26,000 car.

What you do expect – and usually get – with a Subaru is bombproof mechanicals. There are stories on the web about problems with the 2.5-litre engine, but ours didn’t miss a beat. The first service at 10,000 miles cost £183.13, the second at 20K cost £230 and that was my only contact with Souls of Olney, our local dealer. The Michelins still had tread after around 10,000 miles, there was plenty left in the pads too, and it used barely a drop of oil.

Other owners have written in about their STI experiences, and to a man they share my view that it’s an underrated car, with considerable potential to be unlocked through remapping, chassis upgrades and non-standard exhausts to make it sound more like Subarus of old. It’s still a unique character, the Scooby, still got the old magic – if you dig deep enough. What it really needed, though, was some new magic…