The Subaru WRX STI saloon is back, but the Impreza name has gone. 296bhp and 158mph 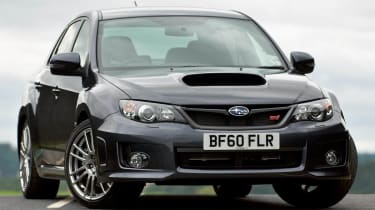 The Subaru WRX STI saloon is back. This time, though, it’s not an Impreza. The new 2011 model overhaul has seen an iconic rallying model name dropped as a host of upgrades has been introduced. Most visual, of course, is the return of the iconic saloon shape after three years in the wilderness. There’s no big bookshelf wing on the back, though that’s not likely to stop keen owners from adding one. The five-door hatchback bodystyle continues, too. Under the skin lies a revised engine. The 2.5-litre flat-four boxer engine (turbocharged, obviously) still produces 296bhp and 300lb ft, but torque delivery across the rev-range is boosted while the unit has been cleaned up, too, successfully meeting stringent Euro 5 emissions regulations that have killed off the likes of the Mazda RX-8 and Honda Civic Type-R. The top speed is 158mph while 0-62mph takes 5.2sec. There’s a stiffened bodyshell while the suspension has been heavily reworked, with the fitment Subaru’s much-lauded Spec C setup (a Japan special, road tested here). There’s a lower ride height and wider tyres, while all-new alloy wheels are 2kg lighter per corner, reducing unsprung weight.

REVIEW OF ALL-NEW SUBARU WRX STI IS HERE Subaru’s Symmetrical all-wheel drive predictably remains, with a default 41/59 front/rear torque split while a three-mode ‘Intelligent Drive’ system allows adjustment of the car’s characteristics to suit driving conditions. And the iconic boxer burble is enhanced, thanks to a new exhaust system with larger piping… Both four- and five-door variants will set you back £32,995. That’s a pretty hefty rise of around twenty per cent over the outgoing hatchback. That reflects both an abundance of equipment (including keyless entry and go and a stocky stereo setup) and competition with its key foe, the Mitsubishi Lancer Evolution X, which costs £32,799 in comparative specification.