Type-UK gets new look and some extra enhancements 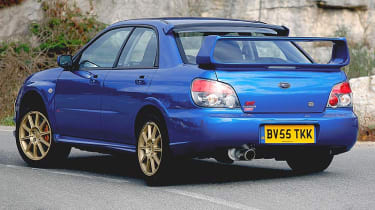 Well, which one would you buy? Type-UK or Type-D? The latter is a new one in the Subaru Impreza WRX STi lexicon, and it stands for Discreet. Relatively discreet, anyway. It has silver wheels instead of gold ones and a smaller rear spoiler instead of the big double-decker affair. The small spoiler looks like something from an accessory shop, the sort of thing people stick on ten-year-old Mondeos. Discreet? Dubious, more like. Or Daft. An STi needs to look either like an STi or a coherent alternative. The latter doesn't exist, Discretion or not. So we'll go with the proper article, now with an extra vane spoiler above the rear window which directs airflow more productively towards the main edifice. As we know, the latest Impreza has Subaru's new facial identity.To my eyes it sits oddly on the familiarly bumpy and vent-rich STi form, but improved airflow around the nose has allowed the bonnet scoop to become less protuberant while still satisfying the intercooler's appetite. As with the regular WRX, the flat-four engine is now of 2.5 litres, as it has been for a while in US-spec WRXs, and in STi form it makes 277bhp and 289lb ft of torque. This it sends through a mildly recalibrated transmission whose default front-rear torque-split is now 41/59 instead of the former 35/65. But this doesn't mean more understeer, merely better manners. That's because the front LSD is now a quicker-acting Torsen item and there's an extra yaw sensor. Taken together, these changes let the STi hold a rearward torque bias for longer, reduce its torque-steer and sharpen its steering. The six-speed gearbox is revised, too, with a wider ratio spread made possible by the engine's extra torque. Subaru says the suspension is as it was, itself revised a year ago with, among other things, a wider rear track, but that's not how it feels. Squirting the Scooby out of the launch hotel and up the wonderful Col de Vence reveals a car not quite as battering of the senses as before - it even has a decent ride - but even more devastating in its ability to chew up bends and spit them out. Those heftier cylinders, plus a new electronic throttle, help mask the turbo lag: this is an STi that responds more crisply than ever before. It's a wallop of energy, most amusingly used as you power out of a bend and tip the tail into a little oversteer flourish. A new, emissions-friendly exhaust manifold with a different sequence of pipe-linkings has muted the Subaru burble, but it's still a uniquely deep sound that belies the engine's revvy nature. The gearshift is tighter and crisper than in other WRXs, too, with short movements and no crunching. More cross-gate spacing would be good, though: it's easy to miss your aim. It's mighty fast, of course. But it's the way you can carry speed through corners, the way you aim, turn, get the power down and catapult out that's truly addictive. The STi might pogo through bumpy bends like a rally car as the grip limit approaches but it's always pulling in the right direction, feeding all back through the intimate steering, always planted, always forgiving. But then the STi always was like that. The difference is that now you're going faster and it reacts to your inputs more keenly and cleanly. Maybe the Scooby cult is wearing thin now. Maybe this is a makeover of an ageing car. But what a character the STi still is. That was the best blast up the Col I've ever had.