Henry’s got a nice new, Ice Blue Subaru Impreza WRX Sports Wagon to carry his pushbike around in 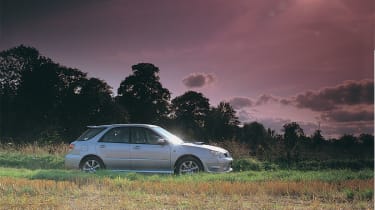 Not a gold wheel, big wing or bright blue paintjob in sight. We’ve been accused in the past of overlooking the ‘lesser Impreza’, so I thought it was about time we put an end to it. And whilst we were on a mission to break down stereotypes, I thought we should go the whole hog and plump for the five-door Sports Wagon (which costs an extra 500 quid and, in my opinion, looks cooler).

I’ve been a fan of the current WRX ever since I drove it at the launch on the Col de Vence (Driven, 086). Memories of dashing past sun-drenched rock-faces, hanging on to the exhaust of an STI, will stick with me for many years, and BF56 EVY feels just as good as that car did. There’s a refreshing mechanical honesty to all the controls and the way it goes about its business. The gearbox, steering and ride all have a weight to them that is in stark contrast to the slightly digital, synthetically assisted sensation that the majority of today’s cars dish out.

The only disappointment so far is that the interior has a slightly less polished ambience than is the norm these days. The seats are good and everything works well, but it has the air of a car that would be happy living on a farm with wellingtons tramping in and out of it. Fine by me, but when most modern cars look designed to reside on a suburban driveway with nothing more ugly than pristine trainers on the way to a gym gracing their carpets, it might not be everyone’s cup of cha.

The gearbox has just five forward ratios in it, which is as refreshing as finding a manual ’box in a supercar. It allows you to surf along on the abundantly torquey midrange of the 2.5-litre flat-four, flowing between corners and enjoying the road without having to continually buzz up and down between cogs to keep things chirpy. Such is the strength of the engine that you can happily stay below 4000rpm and still make very, very rapid progress, which certainly made the running-in period more fun than usual!

The all-wheel drive system works sublimely, endowing you with prodigious, reassuring grip no matter how wet the road. Through longer corners (like a slip road, perhaps) you can set the WRX up to take just a smidgeon of attitude and then hold it seemingly endlessly. And this with room for a mountain bike and half of Waitrose in the back.

The Subaru has already had its first service, which was due after 1000 miles of running on special break-in oil. Westaway of Northampton did the deed while I waited, and after less than an hour I was walking back out to the car having been relieved of only enough spondoolies to cover the parts used.All in all the WRX is providing ample proof that less can indeed be more. And I haven’t even called it a Scooby yet…