Would I like to join three others and do a Nurburgring 24hr race… on a bicycle? 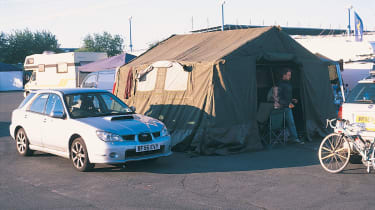 That was the question posted into my email inbox from Marcus Eales three months ago. Why not, I thought. It was a brave call on both our parts, given that I didn’t know them from Adam and all they knew about me was that I’d cycled my bike round Bedford’s West Circuit for our 100th issue jamboree.

Anyway, after too little training the day arrived and I found myself seriously regretting booking a ferry for 8am (I’d been writing until 2am – it’s not all a bed of roses, you know. Your sympathy is boundless, I’m sure) just so I could drive a couple of laps in the public session that evening. But it was worth it. Given that the Subaru had my bike in the back, I thought I’d just do a sedate lap or two to work out where it would be terrifying and where I would be in a world of pain when I got on the bike the next day. Some indeterminate time later I arrived back in the car park absolutely buzzing, having fallen in love with the ’Ring all over again. As for scouting it out, well, ‘it went up at some points and down at some other points’ was about all I’d registered, having got rather more sucked into driving it than I’d intended (following a GT2 skittering through Galgenkopf left me in no doubt why we’d included it in our Scary Cars feature last month). The second lap wasn’t a lot more enlightening. Taking corners a gear higher than the first lap seemed to play to the Impreza’s strengths, however, and the Nordschleife’s flowing corners seemed perfect for the WRX.

I met the others – Marcus, Julian Dazeley, David Joyce and Chris Gearing – that evening at the Blaue Ecke in Adenau, where we embarked on a strict process of carbo-loading by drinking more steins of Pils (that’s Pils as in Pilsner, not pills – this wasn’t the Tour de France) than was really a good idea.

The noon start came around rather quickly. The top teams got garages in the pits on the new GP circuit and the Auto Motor und Sport team had an entire coach. I thought we struck the right tone in the paddock by erecting a sort of huge Dad’s Army tent that Julian Dazeley (who flies Hercules for the RAF during the week) had borrowed from work. Pains were taken to set up a Playstation, complete with steering wheel, pedals and GT4, so we could brush up our lines through Pflanzgarten when we weren’t out cycling.

It was, I think it’s fair to say, much tougher than any of us had envisaged. The feeling of hitting a maximum speed of 53.7mph at the bottom of the foxhole or flying through Miss-Hit-Miss at over 40mph made every lap memorable. As did the sense of dread approaching the huge climb up from Bergwerk. You noticed even the tiniest gradient change. Ever thought it was slightly flatter on the exit of Klostertal? Well it is, and it’s bloody lovely. The ascent’s final vicious kick up to Höhe Acht was particularly agonising, making all your leg muscles burn with lactic acid.

We all did two laps in total darkness, which was utterly terrifying at first – especially for Dave and Julian who had never been to the Nürburgring before. Partnerships were formed wordlessly in the dead of night as two or three of you would share slipstreaming duties down the Döttinger Höhe straight. Language barriers were broken down, too, as I let out some indiscriminate cry of pain near the top of the climb and a chap I was overtaking just smiled and said ‘Scheiße!’ in agreement.

The rules required that we had a non-cycling team captain and Chris filled the role manfully. He brought us pasta in the middle of the night, kept tabs on when we were due on track and even carried out the hugely unenviable task of waking us from our brief slumbers.

The change-overs were crucial, Julian bellowing ‘GO HENRY!’ in best military fashion (the Germans preferred ‘ACHTUNG!’) as he came hammering out of the night, thereby terrifying me into action and waking every animal in the Eiffel forests. We had a couple of minor setbacks – Dave’s rear derailleur broke at Flugplatz, leaving us with a ten-minute disadvantage only four hours in, and then I nearly scuppered everything by running into someone early in my last lap and had to keep my fingers crossed for half an hour that the bent spoke on my front wheel wouldn’t give way completely.

By the end we’d completed 400.4 miles in the 24hrs, each doing seven 14.3-mile laps. Marcus managed the fastest lap in our team of 43min (I was lagging some two minutes behind with a best of 45min) and to our huge delight and great surprise we ended up 72nd out of 480 teams. The two Auto Motor Und Sport sponsored teams were, we were quietly pleased to see, some way behind.