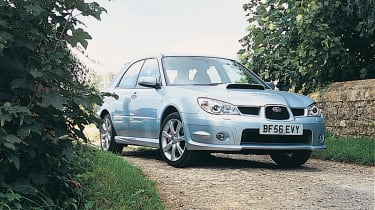 You know where you are with it. Not for EVY the fads of mood lighting or fake bonnet scoops like Jethro’s Mini. No ‘la-de-da’ hidden door handles like Ev’s Cupra. And no irritating hyper-sensitive throttle like Neil’s R32 and Chee’s TT. If it were British, it would be from Yorkshire.

And yet the WRX is also probably the most deceptive, dishonest and downright misleading car in the vast underground evo garage. It’s the pool shark, the ultimate poker player, the ringer in the auction house. Why? Because people can’t tell that it’s had the Prodrive Performance Pack added to it, so when it flexes all 310lb ft of torque it comes as something of a shock to those who’ve merely clocked the estate proportions and (apparently girly) baby-blue hue. As the usually more expensive machinery disappears in the mirror you can almost hear EVY burbling ‘more brass na brains’.