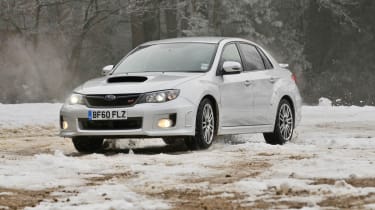 Subaru has given its WRX STI sports saloon more power. The former Impreza has a 2.5-litre turbocharged boxer engine that normally boasts 296bhp and 300lb ft, but an engine upgrade sees those figures rise to 316bhp and 332lb ft, enough to drop the 0-60mph time under five seconds, to 4.9sec. That’s quicker than a Lotus Elise or Porsche Cayman S. The power pack has been developed by Subaru UK and is covered by the car’s warranty, and can also be reto fitted to cars already bought. And the power pack will be fitted to all WRX STIs bought between now and the end of June for free, alongside a touch-screen satellite navigation system. The offer applies to both four and five-door variants of the Subaru WRX STI, the pair sharing an identical £32,995 price tag. Read our Subaru WRX STI review here Subaru WRX STI v Mitsubishi Evo X Subaru WRX STI v Lamborghini Superleggera