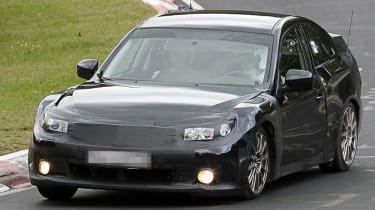 Last week saw the unveil of Toyota’s FT-86 concept, a preview of the Toyota/Subaru joint-venture coupe that’s just around the corner.

The concept itself is very promising, not looking too far off production reality while also offering up pretty striking looks, inside and out. And these spy shots prove the real thing can’t be far away, as under the disguise lies what appears to be a pretty substantial car with proportions close to those of the FT-86.

When it hits the roads, it’s set to mate a Subaru Impreza-sourced 2-litre flat-four boxer engine to a rear-wheel drive chassis, modified from the all-wheel-drive Subaru Legacy.

While the 2-litre Impreza musters up 148bhp, the Toyota/Subaru coupe is set to offer upwards of 200bhp, transferred to the rear by a six-speed manual gearbox. That should mean performance that closely rivals its Volkswagen Scirocco foe – 0-62mph in 7.2sec and a 146mph top speed – as the pair share near identical dimensions.

The Japanese car should trump the VW with its rear-drive dynamics, though, and be more of a drivers’ car. We look forward to finding out. The location of these spy shots - the Nürburgring - has to be a good sign.

Toyota’s FT-86 coupe concept will be shown at the Tokyo motor show later this month. Keep your eyes on evo.co.uk for the latest from the show, including a special edition Subaru Impreza, updated Mitsubishi Evo X and the reborn Honda CRX.Click for more pictures of the striking new Toyota FT-86 coupe