Toyota returns to the Le Mans 24 hours in 2012, competing to win in top LMP1 class with a petrol-electric hybrid 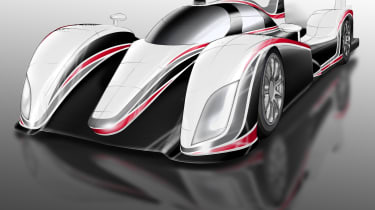 Toyota will return to the Le Mans 24 hours in 2012. And it will be fighting for overall honours in the top LMP1 class with a petrol-electric hybrid racing car. The return to France’s round-the-clock race will be the pinnacle of Toyota’s participation in several races of the 2012 FIA World Endurance Championship, a move intended to aid development of the firm’s hybrid technology. The car’s chassis will be designed, developed and produced by Toyota Motorsport in Germany, while the hybrid powertrain comes from Toyota in Japan. The Le Mans team will be based at Toyota Motorsport’s Cologne HQ. Toyota Motorsport chairman Tadashi Yamashina said ‘Toyota has entered Le Mans before, but by using our hybrid technology this time will be a completely new challenge. We want to write a new chapter in the history of the Le Mans 24 Hours, as in the FIA World Endurance Championship, through our use of hybrid technology.’ A comprehensive pre-season testing programme begins in early 2012. It marks Toyota’s return to the Le Mans 24 hours after more than ten years away, one of its three GT-Ones finishing second in 1999’s race after a difficult race with a number of tyre failures throughout the team. Porsche also returns to Le Mans in 2014, with hybrid power expected from its entry, too.