Toyota S-FR sports car concept gets ready for the track 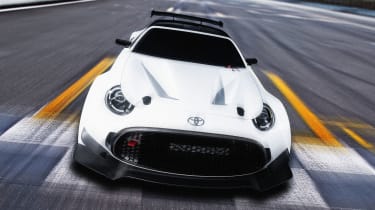 One of the undoubted highlights of October’s Tokyo motor show was the Toyota S-FR. A compact, MX-5-sized coupe, the vibrantly-painted concept is the best indication yet of a sub-GT86 sports car from the Japanese firm.

Now, Toyota has released images of its take on a racing version of the car. Called the S-FR Racing Concept, it takes the S-FR’s pseudo-retro styling (harking back to the Sports 800 of the 1960s) and brings it screaming into a modern racing environment.

Still blessed with the same compact proportions and unique detailing, the Racing Concept adds significant aerodynamic addenda – from a deep front splitter with canards, to a GT-style rear wing perched atop the rear deck.

The car also sits lower than the production car concept, though Toyota has shied away from slotting enormous alloy wheels under each arch – the eight-spoke wheels look well-suited to the S-FR’s diminutive shape. Between the arches are large sill extensions, while a deep diffuser defines the rear end. 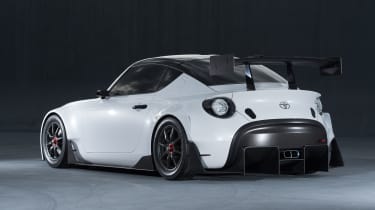 All those details seem oddly specific for a car Toyota still hasn’t confirmed for production, though unfortunately powertrain details are as thin on the ground as they were for the road-going concept. That car is anticipated to have similar weight and power figures to Mazda’s current MX-5, providing enough differentiation to the larger, more powerful GT86.

The Racing Concept meanwhile has more than a hint of Japan’s GT300 Super GT series about it – a class where more compact vehicles have long competed, including a rear-wheel drive version of Honda’s CR-Z hybrid coupe.

The Toyota S-FR Racing Concept will make its debut at the Tokyo Auto Salon 2016 – the country’s largest car modification and customisation show, which takes place from January 15-17.