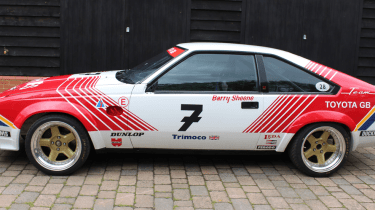 Excitement might be building for an all-new Toyota Supra but the classic models still have plenty to offer - especially when it's an ex-BTCC car driven by the legendary motorcycle racer, Barry Sheene.

The ex-works Group A touring car is set to cross the block in July's Silverstone Classic Race Car Sale, hosted by Silverstone Auctions this July.

It's a car of impressive provenance, having been built to contest the 1985 BTCC season - back then known as the Trimoco RAC British Saloon Car Championship - with Barry Sheene at the wheel.

Sheene had retired from motorcycle racing the year before, with 500c Grand Prix titles in 1976 and 1977 to his name, along with 23 Grand Prix victories. In a test at Goodwood, Sheen proved only 0.4 seconds slower than Toyota's previous hot-shoe driver Win Percy, securing him a seat for the 1985 season.

Sheene never won in the Supra, but did take a third place finish at Thruxton and another third place at Silverstone, only two weeks after being involved in a crash that required Toyota to re-shell the car. The example for sale at Silverstone is this re-shelled racer, in which Sheene scored several more top-six results in 1985. 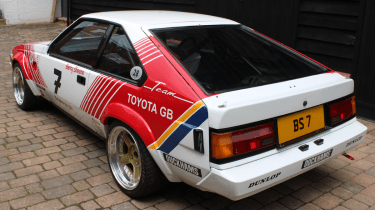 Chassis 00056255 packs a 2759cc, naturally-aspirated inline six built to Group A regulations by Hughes of Beaconsfield, which campaigned the car on behalf of Toyota UK. Since 2012 the car has enjoyed a full restoration, including overhauls of the suspension, clutch, braking system and fuel system.

In its current state of tune it's developing 204bhp through a five-speed 'dogbox', and was most recently seen at the 2016 Goodwood Festival of Speed.

Its next owner shouldn't struggle to run the car, as the listing also comes with a comprehensive spares package, including everything from diffs and driveshafts to a full bottom end, head castings and race cams.

The Supra is estimated to make between £60,000-80,000, plus VAT and a 15 per cent buyers' premium. A not insignificant amount, but not bad for such a rare and distinctive car - and one driven by one of the world's great motorcycle racers.

You can find the lot listing for the Supra over at Silverstone Auctions.