Toyota has confirmed the next hot Yaris will be built in conjunction with its WRC team and will be more extreme than the new Yaris GRMN. 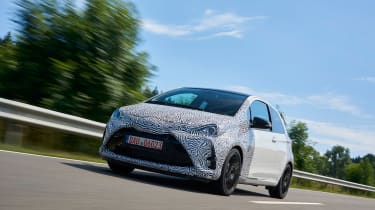 Speaking to evo’s sister title Auto Express at the Tokyo Motor Show Gazoo Racing President, Shigeki Tomoyama, confirmed the next Yaris hot hatch will be designed, engineered and developed with the requirements of its World Rally Championchip team in mind from the outset.

Tomoyama told Auto Express “We know our current situation and we believe that we need to change the platform for the rally car to be even more competitive. So for the next generation of rally Yaris we will prepare a homologation road car. We have to commit to producing 25,000 of them in one year, so it won’t be a limited edition like the GRMN.”

While Tomoyama wouldn’t discuss specific changes, he did confirm suspension pick-up points, weight loss and improvements to weight distribution were key areas he and his team need to focus on.

A rule change in 1997 effectively killed off the homologation road cars, ostensibly to prevent manufacturers from spending vast sums on low volume road cars in order to gain a competitive advantage on the rally stage. One of the biggest criticisms of the modern WRC is that there are no direct road car equivalents to the machines contesting the championship, so while Toyota’s homologation Yaris is unlikely to be as extreme as a Subaru 22B, it is a step in the right direction.