An endearing effort with much to appeal to the enthusiast driver. Flawed, yes, and undoubtedly expensive, it’s still a promising start 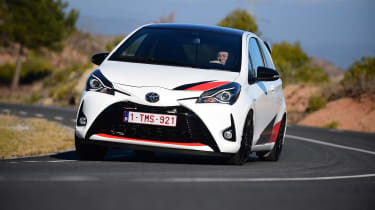 This is the Toyota tasked with launching the Gazoo Racing sub-brand in Europe, hence there’s a lot riding on the shoulders of this little Yaris. evo first drove it in prototype form back in the summer of 2017, and only detail changes have been made since then. In the meantime, all 400 cars (plus a further 200 restyled versions for the Japanese market) have been sold, at an eye-widening price of twenty six thousand pounds. Does the finished article justify the price?

The Yaris GRMN is in many ways defined by its ‘2ZR’ 1.8-litre supercharged engine.  It’s a type of powerplant unique in the current hot match market, and while it uses forced induction its throttle response is superior to that of rivals that are all turbocharged. It’s powerful, too, with a peak output of 209bhp and a slightly less impressive 185lb ft maximum torque output developed at a high 4800rpm. 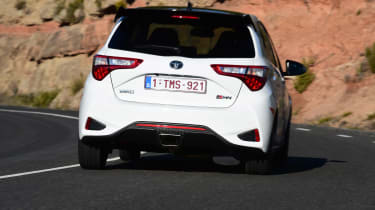 It’s not hard to imagine that this is an engine that will thrive on revs, instead of yeilding the easily delivered torque of the kind we’ve all become used to with modern turbocharged engines. The engine’s character, and its effectiveness, is aided by the traditional charms of a close ratio six-speed manual gearbox. Toyota quotes an official 0-62mph time of 6.4sec (although it’s worth noting that the car won’t quite reach that speed in second gear, making it all the more impressive) and the top speed is electronically limited to 143mph.

Many of the engineering challenges during the Yaris GRMN’s development revolved around packaging the necessary hardware within the humble Yaris bodyshell, and the associated issues of heat management and maintaining emissions compliance. The Magnusson-Eaton supercharger, its intercooler, and the air intake, are packaged as one, slotting down into the front of the engine bay. The exhaust was a particular headache, as there was no provision for the necessary shape and diameter of a performance pipe with the standard Yaris underfloor.

Since we last drove the car the engineering team have slightly adjusted the power and torque curves for stronger mid-range grunt at the expense of a little top end fizz, and also made the car appreciably quieter. The latter is betrayed by a large silencer box, which hangs low and slightly awkwardly behind the rear bumper.

As for the chassis, that benefits from considerable bracing of the structure to create a stable basis from which the Sachs dampers, considerably stiffer springs and larger anti-roll bars can work. The front suspension towers are joined together by a strut brace, while underneath there’s a stronger front subframe and four bracing links. 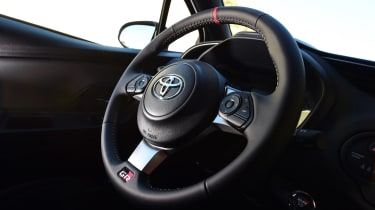 The wheels are 17-inch forged items from BBS, shod with Bridgestone Potenza RE050 tyres in a 205/45 R17 size, while the front brake discs are only 275mm in diameter but gripped by bespoke four pot calipers. Another key item on the spec sheet is the adoption of a Torsen-type limited-slip differential to maximise traction at the front axle.

There’s something refreshingly honest about the Yaris GRMN from the moment you start to drive it. The team behind the car wanted to create a small hot hatch that wasn’t defined by just the numbers, but by the way in which it drove - and a requirement for the driver to interact with it. Nevertheless, there were some changes that were out of the question for reasons of cost, and due to the tight timescale - just two years - that the project was completed in. That’s why there are no wider wheel arches, for example, merely a large rear wing and centre exit exhaust, which apes the one on the Yaris WRC. The GRMN’s unique livery of white panels, black roof and loud graphics give it a visual personality, but it has nothing like the presence of, say, the old Renaultsport Clio 197/200.

Inside, there are some excellent bucket seats and the smaller steering wheel usually found in a GT86, but the driving position is poor, at least for taller drivers. The ageing Yaris platform offers very limited steering wheel adjustment, and to lower the seats any more would require new crash structures and corresponding testing, but the net result is you never feel fully integrated within the car.

Still, thumb the starter button and the 2ZR fires keenly, idling with a note that’s more vocal than a 208 GTi’s, but a fair bit quieter than on the prototype we drove before. Apparently feedback back then from some journalists was that the car was too loud, but rest assured, evo wasn’t one of those… 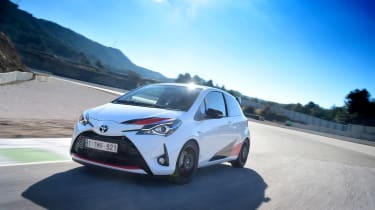 It’s a joy to work the GRMN’s engine hard. It’s not just a means of getting along the straight sections of a road quickly, but rather something that’s a source of satisfaction itself just to deploy. Clearly, it lacks the low-down punch of some, but the mid-range is surprisingly effective and most of all, it loves to be extended between 5000-7000rpm.

While there is the distant characteristic whine of a supercharger at lower revs, it’s the rush of compressed air and exhaust blare that you hear towards the red line. Crispness of response is its major advantage, complemented by a slick and precise gearchange.

Since we last drove the car, Toyota has re-tuned the front dampers and worked on the calibration of the power steering, making it slightly heavier and attempting to provide a little more feel from the electro-mechanical setup. In normal driving the GRMN is surprisingly undemanding, with a ride that, while possessing an underlying firmness, is far from uncomfortable. There is perhaps a fraction more weight to the steering, but there’s still a slightly artificial manner to the way it self-centres and, in fact, during those first few degrees of lock when you turn into a corner. It’s a glassy, remote kind of sensation, which on cold, wintry roads means I’m over-committing on the amount of steering lock required, and therefore overloading the front tyres, which clearly don’t have the outright grip of the Michelin Supersports used by the aforementioned Peugeot. Nevertheless, get through this phase and it’s clear that the nose does stick, and the Yaris GRMN can be thrown down a road with manic enthusiasm, revs flaring, nose gently torque-steering under power but never requiring a firm hand, and all at very high speed.

The GRMN engineers have consciously settled on a chassis tune that’s playful, but also one that strikes a fine balance between interaction, adjustability, and confidence-breeding stability. It’s appreciably less tail happy than the 208, but no worse for it. 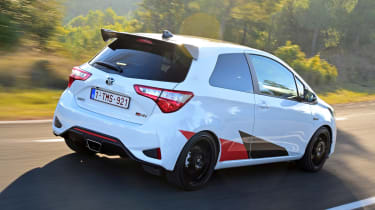 Toyota also allowed us to try the Yaris GRMN on a circuit with a Bridgestone RE11S tyre – a super-sticky, limited tread and unrefined tyre not homologated for Europe, but similar to something like a Toyo R888. Grip levels were unsurprisingly very high, but the Yaris felt entirely comfortable with its grippier boots, the diff still finding great traction, the steering heavier and with less of the vagueness on turn-in, and the brakes, too, standing up well to committed lapping.

While we wait for the new Ford Fiesta ST, and given our relative apathy towards the current Renaultsport Clio, it’s our current supermini hot hatch favourite – the 208 GTi by Peugeot Sport – that we inevitably compare the Yaris GRMN to. It too is a special, if flawed and far from ‘cheap’ (£23,550) little car, with a single-minded sense of purpose about it: perhaps more aggressive in its chassis set-up and tyre choice, but less appealing under the bonnet. A twin test should be closely matched.