Toyota is gearing up for the 2022 WEC Hypercar class, showing off it’s contender for the 2020/21 season 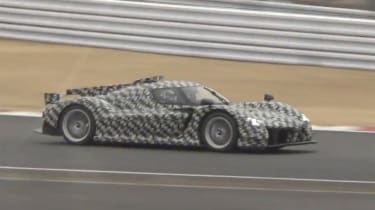 Amongst its hat-trick of wins at the Le Mans 24hr, Toyota Gazoo Racing also used the 2020 endurance race as a chance to show off its LM Hypercar class entrant that will race in the 2020/21 season.

Toyota’s future super sports car will use the same powertrain that’s already proving successful in its current LMP1 car. Not only will this establish a strong connection between Toyota’s motorsport activities and its road cars, but the technology and knowledge that Toyota Gazoo Racing has collected developing the LMP1 car will transfer directly into the new road car. 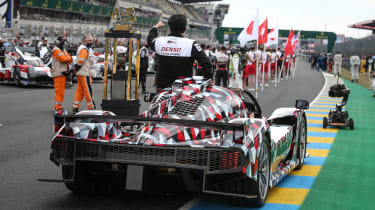 The THS-R (Toyota Hybrid System - Racing) drivetrain used in the Toyota LMP1-H TS050 Hybrid and the GR Super Sports Concept, produces 986bhp courtesy of a twin-turbocharged 2.4-litre V6 and two electric motors. The two electric motors are fed by lithium-ion batteries and develop the same power (493bhp) as the V6. Toyota hasn’t revealed a comprehensive specification, so there’s no word on the gearbox, but it’s safe to assume it uses the TS050’s transversely-mounted sequential unit, too.

Although clearly influenced by its racing brother, Toyota’s GR Super Sports Concept is less brutal looking. The bluff, square pontoon arches of the race car are flatter and smoother on the concept, the sides are more sculpted and the rear is more trim and neater. The GR Super Sports Concept does still have the prominent triangular nose of the race car, similar to the one seen on the Toyota’s Supra concept.

President of Toyota Gazoo Racing, Shigeki Tomoyama, didn’t reveal when the Toyota hypercar would hit the roads, but did say: ‘at some point in the near future, customers will have a chance to get behind the wheel of this incredible machine and experience its astonishing power and driving performance.’

Although Toyota doesn’t have a long and illustrious history of creating super sports cars, it has form when turning its Le Mans prototype racers into road cars. Back in the late 90s, when GT1 regulations governed endurance racing, the rules stipulated that a road-going version of any GT1 race car must be produced. Toyota lightly tweaked its GT-One racer to make it eligible for the road, just as Porsche, Mercedes and Nissan did with their GT1 race cars. 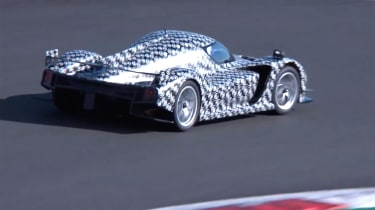 Toyota’s new hybrid hypercar will, just like the GT-One, go up against a Mercedes when it’s finally released. The Mercedes-AMG Project One, will also have a race-derived 1000bhp powertrain, but one borrowed from an F1 car rather than a sports car prototype.

As well as directly powering this next road car, the understanding Toyota garners from the race and hypercar programs will help power its next generation of part-electric sports cars.

Speaking about the concept and future performance models set to emerge from the new Gazoo Racing sub-brand, such as the forthcoming Supra, President of Toyota Gazoo Racing, Shigeki Tomoyama said, ‘rather than developing production cars into sports cars, we aim to work out how to incorporate the know-how gained from racing and rallying into production cars. This is how sporting competition contributes to Toyota Gazoo Racing’s efforts to make ever-better cars.

‘I hope that the GR Super Sport Concept will give a taste of what we aim to achieve with our next generation sports cars.’ So far the new Gazoo brand has produced the Toyota Yaris GRMN for the UK market, but has big plans going forward to expand Toyota’s performance range.