Xavier Foj – an interview with a Dakar Rally veteran 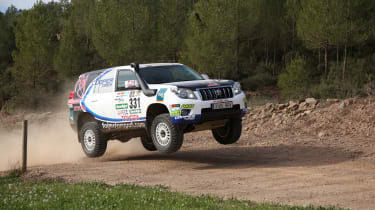 What does a man who is officially a legend look like? You might expect some sort of leviathan, a character striding straight out of the pages of a DC Comic. But Xavier Foj is a relatively diminutive 58-year-old. He’s clearly physically fit (he doesn’t smoke or drink) but, weighing around 63kg, standing 170cm tall in his Sparco racing boots and with grey hair cut short, he looks more like an architect. Which he is.

Foj is one of just six inductees into the Dakar Legends club. Names such as Peterhansel, Roma and Despres are relatively well-known to anyone with even a passing interest in the most famous of rally raids, but Foj is hardly recognised outside his native Spain. Yet he has competed in 27 Dakar rallies, winning his class twice, standing on the class podium nine times and completing the rally for 13 consecutive years. He hopes 2018 will be number 14.

He first competed in the rally in 1991, using a truck from the family limestone quarry near Barcelona. He continued in the T4 category initially (three times as a co-driver) but has since settled largely on the T2 category for series production vehicles, using a Toyota Land Cruiser. We recently caught up with him to discuss his Dakar highs and lows.

What do you remember of that first Paris-Dakar in 1991?

The immensity of the desert. At that time there was no GPS. And sometimes you lose the tracks and are alone, nobody’s there. You ask the co-driver, are you sure we are going in the good direction? They check the road book. Yes. When we arrive at the horizon... the same immensity again. Nobody’s there. Eventually you find the tracks and you arrive at the point, but the immensity of the desert was the most impressive thing. Because if you are lost, you are lost. You feel so little.

Why do you say the stages are harder in South America than Africa?

January is summer in South America so there are some days where it is 45 or 50 degrees [Celsius] outside. Inside the car, much more. Also the altitude: 3000, 4000, 5000 metres. The engine doesn’t work, a lot of people don’t work, so you have to take it easy. The stages are also much faster because there are more very good cars and very good tracks and much more assistance, because it’s easier to do assistance. So, in the stages it’s worse, but in the bivouacs, in the liaisons there is everything: gas stations, tarmac, hospitals, spare parts. You live better.

What’s the biggest challenge with the T2 category?

The biggest challenge is to drive fast and not break anything. You can’t change or repair anything, from front differential, rear differential, gearbox, transfer, turbo, engine... This is a real production and marathon race. 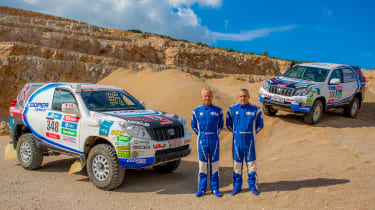 Do you have a particular type of terrain that you enjoy?

Nowadays, you only enjoy the Dakar when you finish! I have skills on the dunes, but I don’t enjoy.

> evo motorsport moments of the year 2017

Why is it difficult starting further back in the field?

When the trucks arrive [and overtake] they rip the piste more than half a metre deep. And they are wider than you, so you have one wheel on top [and one in a rut]. A lot of truck drivers are crazy. They barge you off the piste. They overtake hors-piste, too, because they have the power, the big wheels, the suspension... After that you can see nothing [because of the dust] so you have to stop.

What was your worst Dakar moment?

The worst was when a biker died in my lap. It was in 1997 and I was in a racing Unimog. I had seen a bike and the biker was not there. After 50 metres I saw some colours in the bush. He was lying there breathing harshly with open eyes. When the doctors arrived they cut all his clothes and I was helping, but after 40 minutes the doctors said, he is dead. Forty-two years old. Married. Child. It was his dream to take part in the rally. 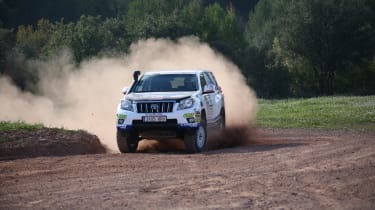 You are a Dakar Legend, but do you have any heroes?

Peterhansel. He is very clever. He wins the stage he has to win. Also his skills as a biker are incredible but he is not a biker that becomes a driver, he’s a real driver.

Xavier Foj was speaking to evo on behalf of Coopertires.