Back-to-basics sports saloon is right up our street, but it won’t be coming here 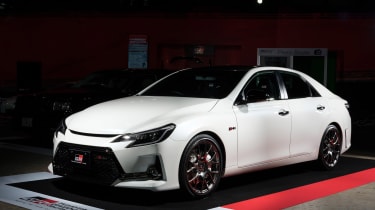 Take a moment to read these specifications for a small sports saloon - rear-wheel drive, a 313bhp 3.5-litre naturally aspirated V6, limited slip differential and and a six-speed manual gearbox. Sounds good, doesn’t it? Could be something from the 90s; probably German; and cylinder layout aside, something from Munich perhaps? It’s not though - it’s a Toyota.

Toyota has quietly been selling wonderfully focused and unpretentious sports cars in the Japanese domestic market for years, almost completely unknown to those not into the Japanese car scene. The Mark X GRMN you see here is one such car, and just the first of a myriad of fascinating models to have featured at this year’s Tokyo auto salon.

> Click here to read about our favourite forbidden performance cars

This generation of Toyota Mark X has been on sale for the best part of 15 years now, arriving in 2004 and always offering a relatively small rear-drive sports saloon package with four- and six-cylinder engines.

This new GRMN model rekindles the sportiest type of Mark X, which last appeared in Gazoo Racing guise around four years ago. As mentioned above, the GRMN includes a 3.5-litre naturally-aspirated V6 which has been seen over here in various Lotus Elise, Exige and Evora models. The engine itself is a relatively mudane unit at its core, powering countless versions of American-market Camrys and Highlander SUVs. Here though, some good old fashioned modifications to the exhaust and induction systems have liberated not only a few more bhps, but also a more characterful side to the supermarket motor.

The Mark X GRMN also features an optional carbonfibre roof, revised springs and dampers, forged 19-inch alloy wheels and a raft of aggressive styling touches. Production is limited to 350 units, but is still out of reach for the UK anyway. But the GRMN Mark X wasn’t the only offering at this year’s show, as below is a brief rundown of what else Toyota brought to the show.

Toyota boss Akio Toyoda is known for many things. Revitalising the Supra is one, re-establishing the importance of handling for the rest of its range another. Oh, and for dabbling in a bit of motorsport himself. So it’s no surprise to find he drives a rather special company car, in this case a one-off GRMN version of the Toyota Century, an eye-wateringly expensive, rare and fascinating luxury saloon designed and built specifically for the Japanese gentry. Or it was a one-off til Toyota revealed a second GRMN Century, this time in grey and not the usual pearl white.

The new Supra is only days away, but Toyota Gazoo Racing decided to launch the racing version anyway, hitting the track in Japan’s Super GT Championship in 2020. Taking advantage of its smaller shell and lower centre of gravity, the he Supra will replace the current Lexus LC Coupe Super GT racing car which has competed since 2017. Like all Super GT racers, the new Supra will feature a 2-litre turbocharged four-cylinder engine, as opposed to the road-going Supra’s 3-litre straight-six. Keep an eye out in the next few days though, and you’ll finally see the road-going Supra for real. 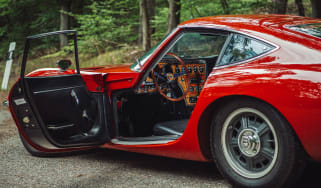 Electrification will likely dominate proceedings, but Geneva will have plenty of performance metal to get excited about too
Visit/toyota/gt-86/202104/toyota-gt86-vs-mazda-mx-5-vs-abarth-124-spider-lightweight-sports-car-shootout