The Vauxhall Cascada is a new convertible model that rivals the Audi A5 Cabriolet. We drive the 168bhp 1.6 Turbo 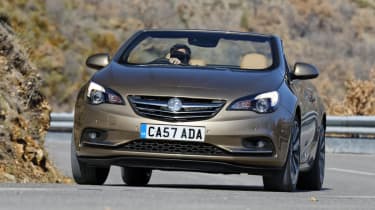 The Vauxhall Cascada. Not quite the Astra convertible replacement it looks, it’s a four seater that’s bigger than an Audi A5 Cabriolet, and therefore closer to an Insignia drop-top in philosophy. Technical highlights?

It’s a ground-up model rather than a closed car with the roof axed, though its underbody components are familiar. The front suspension benefits from the HiPerStrut system first seen on the Insignia VXR (the steering and damping controls separated to avoid torque steer) while the rear set-up is the clever Watt’s linkage that makes the Astra such a tidy handler. Both have been softened to provide the Cascada with the smoother demeanour its buyers will better appreciate, though.

Engines include a 1.4-litre turbo petrol, two 2-litre turbodiesels (one of them the new Biturbo unit), and two tunes of Vauxhall’s all-new 1.6-litre turbo petrol: early 2014 will see a 197bhp version, while our first drive here is in the slightly less potent 168bhp 1.6, on sale now.

Options include the full caboodle of safety tech – blind-spot assist, collision alert, lane departure warning – while the fabric roof, which can be specified with ultra noise-insulating premium fabric, folds in 17sec at up to 30mph.

The new engine combines 168bhp and 207lb ft peaks with 39.2mpg economy. But with a lardy 1658kg to shift (over 200kg more than an Insignia 1.8), its friskiness is as blunted as its 9.2sec 0-60mph time suggests. The engine is keen and boosts well at low speed, but accelerate harder and things begin to feel strained.

Otherwise, the Cascada is a pleasant car. The softened ride settings work well – this is more supple than the A5 it rivals, and it’s only on particularly badly kept roads that there are notable shudders. A caveat is that we could only try cars with the Flexride adaptive dampers, a £790 option.

The Cascada exudes the same resolved handling balance as the Astra and Insignia, and with well-weighted electric steering (adjustable with Flexride specced) it’s a pleasing thing to punt around. Push harder and a lack of proper steering feedback frustrates, but grip levels are impressive and for its likely clientele, the Cascada is more than good enough.

The cabin is exceedingly quiet with the roof up, with most wind and road noise kept out, though it appears strangely weak to certain sound frequencies, the conversations of strangers when you drive through town louder than they ought to be. There’s marginal wobble through the steering with the roof down, but it’s not noticeably worse than any rivals.

This lower-tuned 1.6 will only be available in the UK with a six-speed automatic gearbox, but the more potent version will get a six-speed manual.

And you won’t see more than 197bhp in a Cascada, engineers ruling out anything more exciting, including a VXR version. That would prove too much of a niche offering, despite its potential as a cut-price Audi S5 Cabriolet rival.