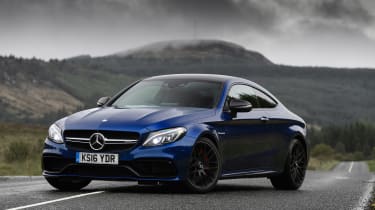 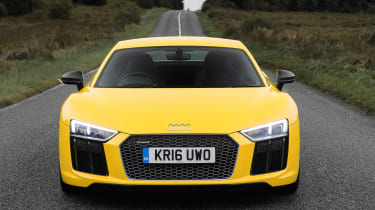 If ever there was a pragmatic supercar, then the Audi R8 is surely it. But don’t be fooled by the sheer usability of the thing, or the slick interior, which is only a small leap of the imagination away from a top-spec TT (and none the worse for that). Any car with that V10, in ‘Plus’ state of tune running at a heady 602bhp, is going to be almost unbearably exciting: in a package as well resolved as the R8’s, it simply means you can use more of the engine’s wonderful exertions, more of the time.

It yelps, it howls, it shrieks – it’s as charismatic pulling hard and warbling at low revs as it is bouncing off the limiter or spinning up between rapid-fire downchanges. It’s a complete masterpiece in two banks of five cylinders.

Far from being the cold, modern face of supercars, by retaining a large, naturally aspirated motor Audi has become one of the last remaining bastions of raw noise. Road Test Editor Dan Prosser is certainly a fan: 'Audi is persisting with the high-revving V10 and it’s a phenomenal engine; the beating heart of the R8. It is a pity that there’s no longer a manual gearbox option, although the twin-clutch S tronic is one of the fastest shifting gearboxes I’ve ever experienced.'

> You can read a full review of the Audi R8 here

What a gearbox that S tronic is, with perfect manners during low speed urban running and then the swiftest, smoothest changes you could possibly imagine at high revs and full throttle; so rapid, in fact, that the car is almost in the next gear before your brain has registered it’s leaving the previous one.

Then there’s the chassis balance, where four-wheel drive has one again been used to provide superb traction, but not at the expense of feeling wooden and inert. Perhaps the new R8 isn’t quite as accessible on the road as the previous model, and big slides are only really possible on a track, but the sheer effectiveness of the R8 cannot be denied.

The question still hangs in the air though: is effectiveness the stuff of an eCoty winner? 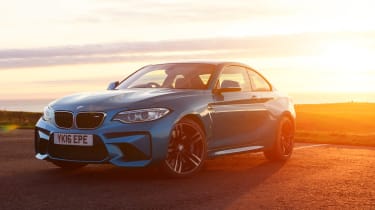 For all the exhaust blast, fire, crackle and brimstone of the M4 GTS, it’s the BMW M2 that’s arguably a more important barometer of where the M department is right now.

This is a much more accessible M car, both in financial and performance terms; a relatively simple, straightforward recipe of powerful, straight ‘six’ in a small car body swollen to – barely – contain the forces from within.

Where the regular M4 has often left us cold, or spooked if it’s raining, the M2 has found much more favour amongst the evo staff. 'On a warm, dry circuit the M2 is a riot. There’s a lovely balance to the car with strong front end grip and then easy, progressive oversteer that belies its short wheelbase.' So said Jethro at the car’s launch in America, and the good vibes have continued now the M2 has reached the UK. 'Sublime, controllable chassis balance' ran our verdict, complemented by 'the M division is back on form' and 'the M2 is a fun and deeply enjoyable package'. Yes, I think you can tell that we rather like this feisty, squat little car with its fun-loving personality.

> More: BMW M2 review - is the newest M car worthy of the badge?

The M2’s motor is a hybrid creation using the block from the M240i series but with M3/M4 parts, although it retains a single turbocharger set up. With 360bhp there’s clearly more than enough power for where the M2 sits in the M division line up, but it’s fair to say it’s not the engine that’s really got anyone excited.

At least there’s a choice of gearbox on offer, and here the decision is obvious: it's manual all the way, not just because of the involvement in the overall package that it promotes, but also because the seven-speed DCT can be too aggressive in operation, unsettling the balance of the car.

And it’s that balance, that faithfulness, which lies at the cornerstone of the M2’s appeal. It’s a controllable, adjustable sort of car, even on wet roads, where oversteer can be a way of life. £44,070 seems like a fair price to pay, but will the M2 have enough appeal to turn our judges heads amongst the exotica on offer during eCoty? 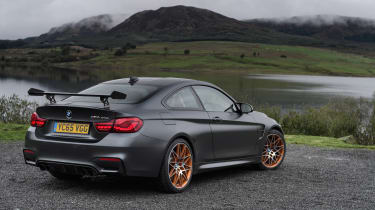 It costs more than twice the price of a regular M4, saves only 30kg over that car, and unless you spend £10,000 on carbonfibre wheels they paint the standard rims orange: yes, the M4 GTS needs to be rather special indeed if it’s to justify both its price tag and its visual braggadocio. Given we’ve called it 'The most thrilling M car for a generation' and lavished it with five stars, maybe then it just can…

Although BMW is making 700 of them, just 30 GTS are coming to the UK, ensuring it will remain a very rare sight over here. The armchair cynics have suggested that might be because BMW knows it’d struggle to sell more in a highly competitive marketplace, but the further you look into the GTS proposition, the more the attention to detail really impresses.

Consider the three-way adjustable coilovers, with 16 clicks for rebound, 14 clicks in high-speed compression and six in low-speed compression. And the 15mm window of adjustment for the ride height, the thicker anti-roll bars, re-worked kinematics, adjustable front and rear wings, carbon fibre bonnet and titanium exhaust. The rear seats have disappeared, and if the Clubsport option has been ticked at no extra charge, there’s a roll cage, fire extinguisher and harnesses. Oh, and ceramic brakes are included in the price. Suddenly, the M4 GTS appears a genuinely serious proposition.

> Read our review of the BMW M4 GTS here

Our experiences with the car so far in 2016 have proved that to be emphatically the case.

'On circuit the M4 GTS is every bit as focused and uncompromising as you’d hope it to be,' said Dan Prosser. 'The road settings for the suspension don’t turn the GTS into a cosseting cruiser,' added Dan, 'but they soften things sufficiently to let it cope well with B-road bumps and although you’ll still find it distracted by cambers, you’re not left fighting the car.'

Note, too, that the BMW M4 GTS will be vying for the ‘volume trophy’ in eCoty 2016, ranged against the Aston Martin V8 Vantage GT8.

So, is the M4 GTS just a shouty exhaust, weird paint finish and a silly price tag, or can it channel its inner CSL to really set eCoty 2016 alight?