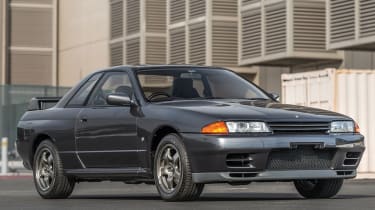 The auction season is kicking off again, and if the RM Sotheby's Arizona sale is anything to go by, we'll see plenty of hugely desirable metal crossing the block over the course of 2017.

evo's tastes are (a little) more down to earth, but several of our picks are set to cross the million-dollar mark. Two Ferrari supercars are among those (actually three, but we've selected F40s several times in these auction previews so it's time for a change), a 1995 F50 in black expected to make $3m-$3.5m, and a 2003 Enzo undercutting it slightly with a $2.7m-$3m estimate.

They aren't the only Italian supercars on sale at the Arizona auction, and they aren't the only ones expected to cross into seven-figure sums either. On the Lamborghini side there's an example of the rare Reventón from 2008. The Murcielago-based, stealth bomber-inspired Reventón cost around $1.5m at launch and when it crosses the block it's estimated to make $1m-$1.4m. 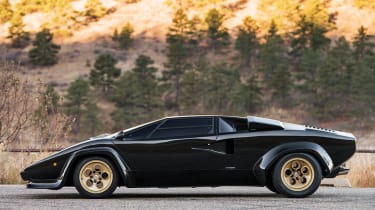 Another black Lamborghini will make slightly less, but is arguably even more striking than the newer car - a 1979 Countach LP400 S Series I. It's up with an estimate of $600k-$700k and is one of only 50 Series I cars produced. Originally sold with a coat of Blu Acapulco paintwork, it's hard to imagine any colour suiting it more than the current black, and it sits on the original gold-painted wheels. It's been with the last owner a remarkable 22 years.

There's plenty of American metal, as you'd expect. Plenty of muscle too, but four cars in particular stand out, at a glance. Two are design icons never appreciated at the time, in the form of a 1937 Chrysler Airflow Sedan (estimate $50k-$75k) and a 1948 Tucker 48, the latter of which could reach a stunning $1.6m-$2.1m. 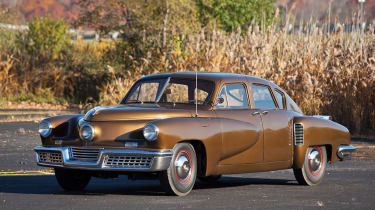 The others are desirable examples of Mopar muscle: a 1966 Dodge Coronet 500, its squared-off lines hiding a Hemi V8 as powerful as that V8 Vantage, and one of the all-time great stock cars, a 1970 Plymouth Road Runner Superbird. The gold Dodge could make $65k-$85k, the Hemi Orange Superbird as much as $100k-$140k.

We've saved the best for last, however. The first is a stunning 1986 BMW Alpina B6 2.7, originally created for the Japanese market to dip beneath a displacement bracket for tax purposes. Car number 40 of 67 could make $50k-$70k.

Next is the moody form of a 1990 Mercedes-Benz 190 E 2.5-16 Evolution II. It could probably get to 60mph in the time it takes to say its name, putting 235bhp to the ground and this example wearing DTM centre-lock wheels by OZ. Like the Alpina, this has lived its past life in Japan, and is expected to reach $225k-$275k.

Last, but not at all least, is a 1989 Nissan Skyline GT-R R32. Cars like this have been eligible for import into the US for a few years now and they're rising quickly in value as a result. This one, as original as they come, could make $50k-$70k.

Make sure you bookmark this page, as evo will be streaming the RM Sotheby's Arizona sale live on January 19-20. You can see the repeat stream from the first day of auctions below.