German tuner Abt has worked its magic on the limited-run Golf GTI TCR, bumping power to 335bhp 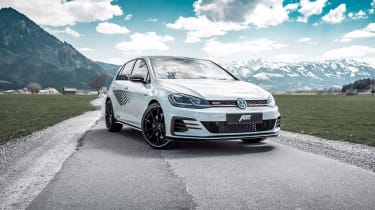 The Golf Mk7.5 has been maturing nicely within the Volkswagen range and so despite its considerable years and imminent successor, the current GTI TCR remains a finely balanced and nuanced hot hatchback, even when compared against newer, more powerful rivals. But with ‘only’ 286bhp, the TCR is outdone on paper by other front-wheel drive options like the Civic Type R and Renault Sport Megane Trophy, a deficit that German VW Group tuner Abt is happy to address.

In combination with Abt’s usual spread of chassis upgrades, the firm has released a new ECU upgrade designed specifically for the TCR-specification EA888 four-cylinder engine. It raises power from 286bhp to a more serious 335bhp. Torque is up too with the peak of 317lb ft representing a rise of 37lb ft. As with all TCRs, power is sent exclusively to the front wheels via an electronically controlled limited-slip differential and VW’s seven-speed dual-clutch transmission.

Performance has improved over the standard TCR, with the 0-62mph time dropping 0.2sec to 5.4sec and the top speed increasing to 164mph thanks to the removal of the standard model’s 155mph speed limiter. 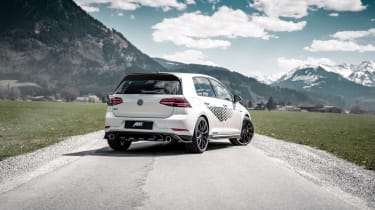 Abt’s chassis upgrades include new springs, ride-height adjustable dampers and redesigned anti-roll bars. Abt’s full range of wheel and tyre packages are available too, topped by a 20-inch wheel design that gives the Golf’s stance a bit of extra aggression, and so too the secondary ride quality if the rubberband profile tyres are anything to go by.

Available through Abt’s usual UK suppliers, the TCR upgrade package might just make the TCR the most extreme and track-friendly Mk7.5 Golf yet, that is if you discount VW’s own Clubsport S from 2017, a stripped out, manual-only limited edition that still sits proudly at the top of our list of best ever GTIs.