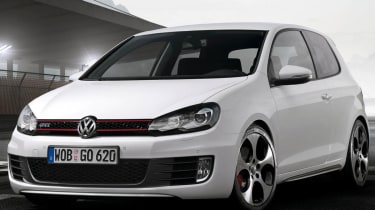 VW is taking its all-new, sixth-generation Golf GTI to the Paris motor show. It’s not a huge step forward like the move from Mk4 to Mk5 was, but that’s testament to how much of an all-rounder the outgoing GTI is.

Under the skin, changes amount to an extra 10bhp – taking total output to 207bhp – and a drop in emissions, down by 11g/km, both of which owe their thanks to tweaks to the induction system. There’s a new electronic limited-slip diff, called XDS, something which appears on a GTI for the first time. Also making it’s hot hatch debut is the adaptive chassis control system (ACC) from the Scirocco, which comes complete with normal, comfort and sport settings.

The engine and transmission are the same as before, so buyers can have the standard six-speed manual or go for the optional six-speed DSG twin-clutch semi-auto.

Cosmetic changes, like on the regular Mk6 hatch, are fairly minimal but do have a distinct affect on the GTI’s styling. Inspired by the Golf GTI W12 concept, there’s a wide, one-piece lower-grille which is far more aggressive than the three-piece design on the fifth-generation GTI. It features foglights on the furthest possible edges of the grille, making the car look wider still. The narrow upper-grille features red-banding, harking back to the iconic Mk1 hot Golf.

At the back of the car, there’s a rear diffuser which features twin exhausts, separated so that each tailpipe is pushed to the sides, echoing the design at the front. The overall effect is a car that looks wider, lower and more squat on the road – despite no major dimension changes over the current car. The alloys are the same design, due to their big popularity on the Mk5 GTI.

While the car is described by VW as its ‘GTI Concept’, the production car due in spring 2009 is unlikely to vary wildly from what you see here. Prices and specs haven’t yet been decided, but with the 197bhp Scirocco GT currently sitting just £90 above the £20,850 Golf GTI, a big rise in cost doesn’t look to be on the cards. There’ll be an R version along further down the line to succeed the V6 R32.

It’s a smart-looker, the new GTI, but is it radical enough? Or is the GTI a bit irrelevant now the Scirocco’s on the scene and Renault’s running away with the ‘hot hatch crown’? Click here and tell the world (well, the evo.co.uk forum) what you reckon.